WALSALL – Speaking to young women at the Muslim Engagement and Development (Mend), event in Palfrey Community Centre, was sobering. In Walsall, West Midlands, students facing all the pressures of college courses and finances, have another pressure to deal with; regular attacks linked to their faith and ethnicity.

The students’ worries were echoed by their newest Walsall representative, Sabina Ditta, elected to the council earlier this year.

“Islamophobia around here has increased and the abuse both verbal and physical is normal now,” she told AboutIslam. 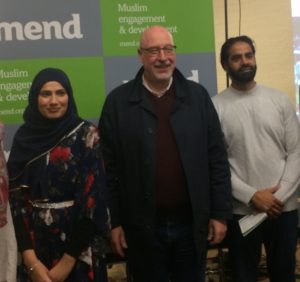 Ditta has herself been subjected to harassment, on numerous occasions. Walking home one evening, she was chased by a gang who threw glass bottles at her. Only the intervention of a nearby bus driver saved her from “something much worse”.

Leader of Walsall Council and community director is Sean Coughlan. Born into an Irish Catholic family, Coughlan gave a moving speech in solidarity with the community he represents.

“In the 70’s as a teenager I was shouted at in the street and called a ‘terrorist’. It’s the Muslims now, it was the Jews and the Catholics in the past. It’s a sad part of our society.”

Ironically enough, Mend’s groundbreaking effort to raise awareness of rising hate crimes in Muslim communities has itself been subjected to attempts to derail it, by far-right groups.

Bedfordshire police, took the decision to support the month-long campaign. Sergeant James Hart, was quoted on the forces’ twitter feed, adding his vocal support for IAM.

In a matter of hours, far right groups from Germany to the US seized on the fact the police quotes appeared alongside the IAM logo which features a hand with forefinger raised. 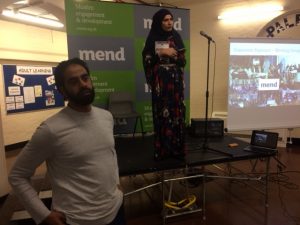 However, Mend’s explanation on the nature of the logo (the finger pointing up means ‘report it’),was enough for Bedfordshire police to recommit to its online support. The raised right index finger, has also been a recognized gesture by Muslims long before IS emerged. It signifies the tawhid, or, the belief in the oneness of God.

The brief maelstrom, whilst petty, confirmed that groups, with extreme anti-Islam views, are monitoring Muslim efforts to coordinate with regional authorities against an islamophobic agenda and trying to derail them. 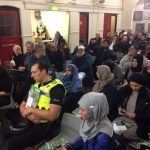 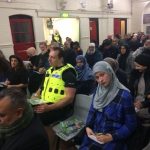 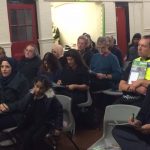 Back in Walsall, local police were happy to attend Mend’s event in a supportive capacity. The officer in the audience was asked if he recognized the portrait of his local society painted by speakers and attendees. He said,

“The news in Walsall is pretty good. Islamophobic incidents have fallen by one to two per cent, which means it’s still high, but things may be improving.

This view contrasts with the experiences of local residents who say that post Brexit Walsall is a far less safe environment for Muslims, refugees and non-white or Eastern European residents.

“The police statistics are right. But, they go by the recording of crimes. The abuse I spoke about – I never reported any of it. I didn’t know how to. It was only becoming a councillor I found out I could report these things as a crime.”

None of the community members AboutIslam spoke to, who shared experiences of abuse for their faith or race, had previously reported them to police. After Mend’s event, the mood for many had changed. A determination not to tolerate verbal or physical attacks awoken.

Leader of the Council, Coughlan feels positive changes are taking root. His own experience of the Muslim community locally is something he speaks of with great affection.

“When I came to work here, a warmth and a welcome of love met me from all the community. I have a wonderful center staff, ninety percent are Muslim women. And they feed me, they spoil me. Don’t tell the wife will ya!”

One thing is certain: that nationwide events open for all and seeking to unite communities enhance the ability of councils and other social and civic leaders to support those suffering prejudice.

They encourage victims of racial abuse and religious hatred to come forward. With committed councillors such as Sean Coughlan and Sabina Ditta, extremists from any walk of life, seeking social division, will instead find unity and hope.