LONDON – A leading British Muslim umbrella group has announced the launch of a six-month program to train women for leadership positions in mosques and increase diversity in community bodies.

“This lack of diversity is unacceptable and it is essential for the management boards of mosques and third sector organizations in general to reflect the communities that they serve in order to function effectively,” the Muslim Council of Britain (MCB) said, The Guardian reported Thursday, October 4.

Twenty women have started the new intensive program aimed at equipping them for leadership positions.

A national conference in Manchester this weekend on the future of mosques, organized by the MCB, will include a session on the participation of women on boards of trustees and other bodies running places of worship and community programs.

Few mosques in the UK have women on their trustee or management boards, and men outnumber women on all charity trustee boards by two to one, according to the Charity Commission.

The initiative comes as some Muslim women are demanding equal access to and greater involvement in running mosques.

In the UK and elsewhere, many mosques encourage women to pray at home.

Where women’s sections exist, they are often small, uninviting and accessed through back entrances. Mosques are traditionally seen as places where men gather for collective prayer and discussion.

It followed the launch of campaign for equal prayer space and inclusion in decision-making bodies by Scottish Muslim women.

The Scottish Mosques for All campaign said: “It is unfortunate that many mosques fail to provide basic access for Muslim women to use the facility to pray, or the quality of the space can often be inadequate and not suitable.

“It is also unfortunate that many mosques have limited or no women present at mosque trustee or managerial level, either intentionally preventing women from taking up these roles or not sufficiently providing a welcoming atmosphere where women feel comfortable to get involved. The place and role of women in mosques is in real crisis in the UK and elsewhere, and this status quo must change.”

An online survey by the group found that two-thirds of respondents said their mosque did not adequately cater for women, involve them in the management or make them feel welcome. 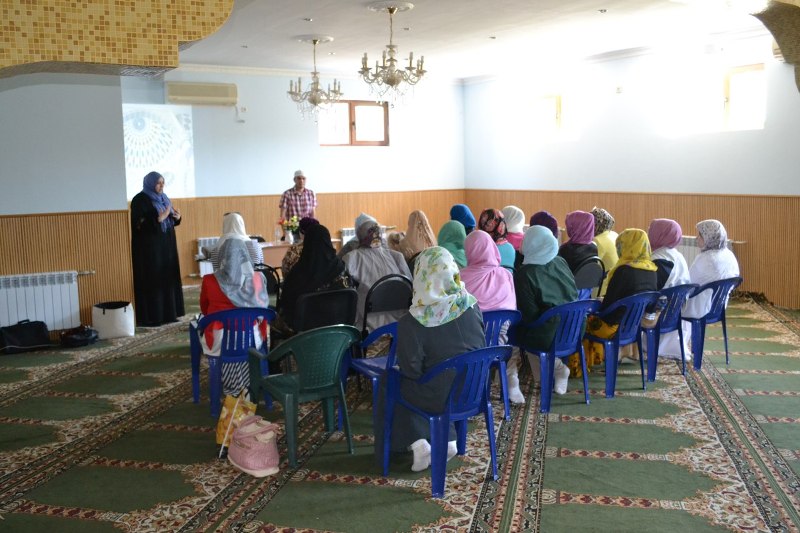 Similar efforts to make mosques more inclusive are led by Open My Mosque, an organization calling for a commitment from mosques to equality, and the Bradford-based Muslim Women’s Council which is raising funds for a mosque led and governed by women, “based on the principles of openness, inclusivity, social justice and sanctuary”.

“Muslim women are doing amazing work in the community, but often have no experience of being trustees or on decision-making bodies. We need to have big conversations around the barriers to women. Most are cultural; in Islam, men and women have equal spiritual standing,” Andleen Razzaq, a former trustee of Al Manaar mosque in west London, who is running the MCB’s women in mosques development program, said.

“We can see the direction things are moving in. Women are feeling more empowered – their voices cannot be ignored, the momentum is definitely there. Young women in particular are hungry for change. If men won’t welcome them, women will be tempted to create their own spaces.”

All mosques should “reflect the values of equality, inclusivity and diversity”, she added.

Ghazallah Hussein, who is taking part in the program, said it was helping her build her confidence and “believe in myself a bit more”. “A lot of mosque committees don’t understand what women want or need. But I think they know times are changing, and they have to change too,” she said.

In a speech on International Women’s Day in March, Harun Khan, the MCB’s secretary general, backed calls for gender equality.

It was “time to ensure that everyone understands their own responsibility in achieving equal access and opportunities for men and women in British society today”, he said.

Referring to domestic violence, pay inequality, abuse and harassment, he said: “Closer to home, why is Muslim civil society still full of many mosques that only have prayer spaces for men and none for women, as if to imply that prayer and a sense of community is only for men?”

The marginalization of women in mosques was “simply unacceptable”, Khan added.

In the US, the Muslim Women’s Alliance is campaigning for women to be given space and made welcome at mosques.

The alliance aims “to empower Muslim women by helping them become leaders, make positive impacts in their communities and enhance their own lives”

Sherin Khankan, one of the two, said she wanted “to challenge patriarchal structures within religious institutions and “patriarchal interpretations” of the Qur’an.