“[Knighthood is definitely way up there, close to my Olympics medals,” Farah told the BBC after the ceremony.

Speaking after receiving his knighthood from the Queen, Farah said he was very excited.

Who would have thought running would get me here….!!!! Amazing career..!! Such an honour to get knighted by Her Majesty The Queen..!!! #SirMoFarah #london #mobot #farahfamily

“I walked in there, quite nervous, but she knew who I was,” Farah told Sky Sports afterward at Buckingham Palace.

“She knows I’ve been going for far too long. She asked me if I was retired, and I said, ‘No, I’m going to the roads’ [full-time marathons starting with the London Marathon on April 22]. She goes, ‘That’s a long way.’ I was like, ‘Yeah.’ Then she asked me what I would like to do when I stop running. I said I’d like to be able to help the next generation, next kids, start at the grassroots, continue supporting younger generations. She said that’s amazing.” 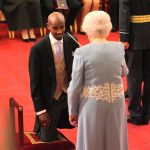 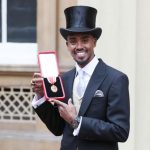 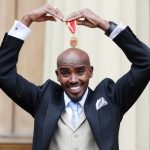 Farah also sounded much more optimistic about going for the 2020 Tokyo Olympics in the marathon than he did last spring.

“If I’m capable of getting a medal or close to a medal (in Tokyo), you will see me.”

Farah became Britain’s most successful track and field athlete when he won his third and fourth gold medals in Rio for the 5,000m and 10,000m.

Winning gold in both 10,000m and 5000m races, Farah cemented his place as one of Britain’s greatest athletes with his double success four years ago.

Repeating the feat in 2012 and 2016, he became one of the world’s most successful distance runners.

He was also awarded a CBE (Commander of the Most Excellent Order of the British Empire) after winning two gold medals at the 2012 London games.