LONDON – For the majority of British Muslims, Ramadan so far has been somewhat bitter-sweet, since violence, xenophobia, and sectarian bigotry have but hugged the global socio-political narrative, putting an entire faith on trial over the actions of a dangerous minority few.

For all the many times Muslims, and Muslim leaders have openly and absolutely condemned tyranny – regardless, since there can never be any justifications for injustice, the greater public has still looked upon Islam through a distorted lens.

Often out of ignorance … at times out of a misplaced sense of righteousness or more simply fear, much of the UK remains in the dark as to what Islam truly means, calls for, and more importantly stand for.

As Dr John Andrew Morrow, the founder of the Covenant Initiative, and author of The Covenants Of The Prophet Muhammad With The Christians Of The World commented: “Only through education, and the promotion of Islam’s real values will we silence tyranny.”

As tones have hardened, and hearts have closed off to multiculturalism, Muslims in the UK have been keen to turn the holy month of Ramadan into a powerful platform to promote those principles so central to Islam: justice, solidarity, and compassion.

As a new vibrant youth organization, The 10th Day designed this year’s program to focus on history in order to help foster understanding – demonstrating to all people, and all manners of faith that Islam stands testament to those very values, and beliefs they hold dear.

Often portrayed as a foreign religion, a faith whose root is too far remote from Western values to truly have a real echo, or a real chance to “assimilate” The 10th Day has dedicated its efforts to linking Christianity and Judaism to Islam by way of the prophets. From Adam to Abraham, Moses and Jesus, both Judaism and Christianity can be found in the Qur’an.

“Our journey began in 2012 when volunteers from Mohebban al-Mahdi Youth Foundation in Manchester UK decided to oppose rising intolerance by offering Hussain ibn Ali (grandson to the Prophet Muhammad) message to the world,” Sayed Faiz Reza Hamdani, chairman of The 10th Day explained. 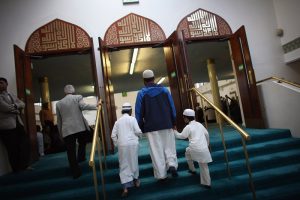 In a time when doubt and fear have tainted society and made communities to stand divided, British Muslims were determined to transcend Britain’s differences by celebrating what all people share in common: an innate yearning for peace and justice, an intrinsic desire to stand free from tyranny.

Inspired by The 10th Day efforts in Bradford in June to promote dialogue through education, dialogue, and humanitarian work, Muslims across the UK have followed suit by emulating such efforts in their own communities.

Dr Riaz Karim, from The Mona Relief Organization, said in exclusive comments to AboutIslam.net that The 10th Day’s new social outreach program could help toward social integration, and counter-terrorism.

This would foster positive exchanges among religious groups, while remaining all-inclusive of people’s cultural backgrounds.

“Britain remains a secular society, and it is important for Muslims to promote their own identity, while being tolerant and respectful of others’,” Dr Karim told AboutIslam.net.

“The 10th Day has quite cleverly reclaimed Islam through history, and thus made it accessible to all. What a better way to mark Ramadan?”

MP Imran Hussain in Bradford, who attended on June 18th an event promoted by The 10th Day noted how important such efforts were for Britain, and in relation to combating racism.

“Imam Hussain’s message to humanity, and the events of over 1000 years ago should never be forgotten,” he said.

A month dedicated to reflection, and peace, Ramadan is also a month of togetherness and compassion – whether communities identify themselves as Sunni or Shiite, Christians or Jews, it is our love for God and pledge to abide by His words which at the end of the day unite us all.

Sofia Theodopoulos, and Sam English, both Christian volunteers with the Church of England said that their whole outlook on Islam and Muslims had changed after they attended The 10th Day Gala Dinner in Bradford on June 4th.

“I used to envision Islam as a religious oddity … an anomaly almost. I never realize just how much we all have in common … just how many prophets and beliefs we share,” said Ms Theodopoulos.

“As a resident of Bradford and a Christian I am very grateful that groups such as The 10th Day exist. I must say that volunteers’ passion for Islam, and their positive attitude have been an eye opener. For the first time I do understand where Muslims are coming from, and what Ramadan truly means for over 1.6 billion people across the world,” stressed English.

This Ramadan 2016, The 10th Day presented a loving and caring image of Islam – as it was meant to be all along.