LONDON – A Muslim woman who became a coach in men’s football has made it to Queen’s New Year’s Honors list, posing a role model for Muslim women in the UK and abroad.

Annie Zaidi, the first Muslim woman to get level two coaching badge from the Football Association, has been awarded the British Empire Medal, Coventry Telegraph reported on Saturday, December 31.

Among the projects she has worked at is the Hillz FM radio station in Hillfields, Coventry, where troubled teenagers credited her with helping turn their lives around.

She has also worked as a coach for Coventry City Football Club Community Trust.

Zaidi from Coventry faced sexism and racism when she first started coaching but carried on despite the criticism. 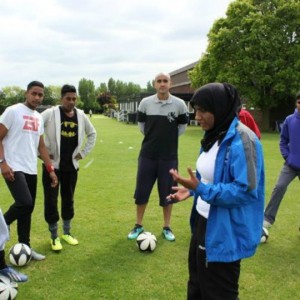 However, her commitment and wish to represent Muslim women has awarded her many honors.

At the Sportswomen of the Year Awards in 2015, she won the Helen Rollason Award for inspiration and was praised by high profile sporting figures for her commitment to the sport.

She won as Asian Woman of Achievement Award as well as Neville Hamilton award for services to sport and the community at the Leicester Mercury Sports Awards.

She is currently working towards the UEFA B coaching license with the Queen’s Park Rangers resources.