Twenty-four years after the genocide in Srebrenica, good people of all faiths gathered on Friday, July 12, to remember the heartache experienced by the Bosnian people.

Under the umbrella of the Remembering Srebrenica organization, which will run over a thousand events across the UK this week, communities came together to speak the words #NeverAgain and to remind ourselves of what happens when common decency amongst people deteriorates at the hands of extreme nationalists.

On July 12th, The City Circle and Remembering Srebrenica ran an evening event at St Ethelburga’s Center for Reconciliation and Peace in London, which brought together Sudbin Music, a survivor of an internment camp who shared his personal account, with entertainment from Bosnian opera singer Aida Corbadzic and guitarist Elvir Solak.

Opening the event, Ben Walker welcomed guests to the evening, “This is the week that 24 years ago a genocide began to take place in the village of Srebrenica in the east of Bosnia during the war in 1992. It was a systematic attempt to wipe out the Muslim population of Bosnia. It was the only genocide to take place in Europe since the Second World War, and it planned and ordered at both the highest levels of the political and military leadership of the Bosnian Serbs.

“Through music and survivor testimony tonight we hope to keep alive the spirits of people that we have met and to keep the memory alive, and to learn the lesson for many years to come.” 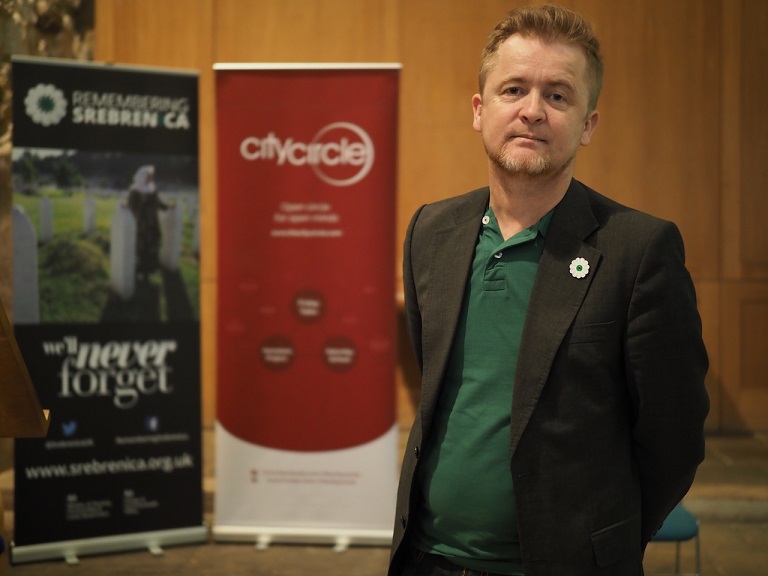 One of the survivors of the concentration camps, Bosnian Muslim, Sudbin Music, shared harrowing insight into his experience, from his father not believing that such a tragedy could happen to the trauma he still lives every day.

Sudbin thanked British journalists who traveled to Bosnia saying that they saved thousands of lives as the world learned what was happening to Bosnian Muslims because of their reporting.

“I will never forget my last school class, the final words of my high school teacher, when he said, see you in the next school year, but those who survive. The end of the school year was the beginning of the end of our community who still today are trying to survive.”

As villages began to be destroyed, Sudbin wondered where the residents of those areas had gone.