NEW CASTLE – Muslim students at Newcastle University held an outside public prayer on Sunday, October 22, to protest the university’s plans to limit their prayer space.

“The room has been a Muslim prayer space for 30 years and it was open 24/7,” Omar Ali, 19, a second-year medical student, told Chronicle Live on Monday, October 23.

“It’s now closed most of Saturday and all day Sunday. There is no alternative outside those hours and we have to pray outside or in other public buildings.”

Earlier this year, Newcastle University announced the temporary closure of its Muslim prayer space, in the King George VI Building, over the summer while they removed asbestos from ducts.

The room used to be open around-the-clock for the exclusive use of the university’s Muslim community.

However, since the space re-opened in September, new operating times have come into force and students claim they have been told it could soon get turned into a multi-faith space instead. 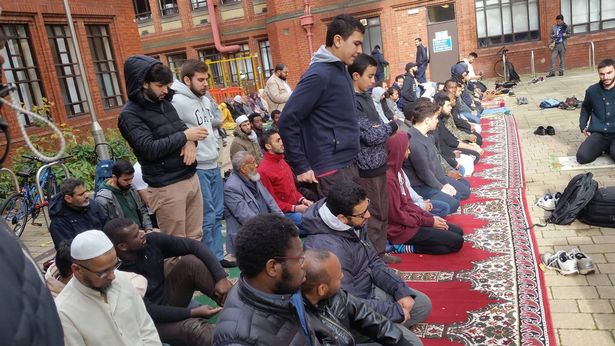 The room is now only open on weekdays and between 8 am and 1 pm on Saturdays, despite the Islamic community needing to prayer up to five times a day.

“The university has said in the past they don’t want people praying in libraries but that is what they are forcing us to do,” Ali said.

Danyal Ladha, 23, a fifth-year medical student, agreed, adding that the prayer room is also closed on Friday, the day in which Muslims perform an obligatory congregational prayer.

“On Friday prayer, in particular, there are so many of us using the prayer space that there is not enough room and we spill outside. The room holds 400, so that tells you how many people use it,” he said.

“There just simply isn’t enough room for it to be turned into a multi-faith space. I would have no problem sharing it with other faiths if it was big enough!

“It just seems like a decision by the university that has come out of nowhere.”

Saman Khalid, 25, a fifth-year medical student, added: “There is no alternative in the city center – the prayer space is a huge asset for us and was one of the best things about the university.

“The decision to limit or change it has just come out of the blue.”