LONDON – Like some hyped up reality TV contestant, Muslims are in-your-face 24/7, whether you like us or not. Admittedly, we most often appear on UK screens via news bulletins; dying in conflict, being attacked by far-right extremists or shoved into a police van with a rug over our heads.

But, I suspect things are about to change. There is a new game in town, ‘Mainstream The Muslim.’

Zeitgeist producers ‘get’ that the Muslim bashing industry has reached its zenith. It’s not only Muslims who now feel nauseated by yet another ‘in-depth investigation into jihad at home’, our fellow Brits surely share the instinct to turn off this tired old tale.

The question then is, what next?

If we compare our TV trajectory to that of the Black British minority then the cartoon version of Asian life, ‘Citizen Khan’ is our own version of ‘The Fosters.’ Starring one Lenny Henry in his first TV break the series was groundbreaking, as it featured nonwhite Britons not only as the butt of jokes but making their own. The general public could all share the jokes too. Such as this classic. The youngest Foster reads his mum the newspaper.

“It says here that 50 per cent of black teenagers are unemployed and 11 per cent of immigrants are out of work.” Mrs Foster looks delighted. “Oh we’re really going up in the world!”

Citizen Khan’s stereotyping of the porch-Muslim as foolish, rather dim and always chasing cash, puts our community at around 1976 in terms of TV equality.

Let’s not despair, the next stage in the ‘normalization’ process in which mainstream channels get to make money out of us (whilst still treating us as ‘the other’) is examining our community as if we are a rather peculiar, yet colorful ‘species’. 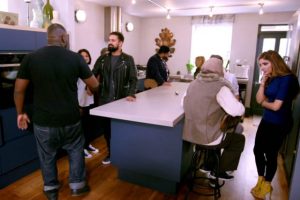 This metamorphosis kicked off with the airing of the BBC reality documentary ‘Muslims Like Us’, a two-part series putting 10 men and women from different parts of the community into the same house for ten days.

The cast had a child-like predictability. There was the homosexual, the feminist, the token hijabi. And, of course, no group of Muslims can possibly gather without having in our midst, an ‘extremist’. This role was carried out with authentic truculence by Abdul Haqq, a former boxer and revert to Islam. Reading about the show beforehand I couldn’t help but hear David Attenborough’s mellifluous tone in my head.

“Here, here, here, in the blustery wilds of the north of England, a group of fascinating and colorful Muslimae Reduciae are seen fighting over onions in this rare footage…”

Then came the first of several (not unpleasant) surprises.

The series opened quietly, even spiritually. In tight close-up, each housemate recited a line from Al Fatihah. It was powerful to watch ‘The Opening’ of the Holy Qur’an recited with the English translation running beneath. Who thought that in such dark times, the opening of the Islamic prayer would be slowly played on BBC2 for British viewers to absorb free from external comment.

However, Abdul Haqq allowed himself to be a tool of predictability and producers began their fun and games. Mehran, is a pretty teacher whose false eyelashes and fitted clothing hide only her piety. She sat nervously at the kitchen table and in walked Haqq. Rather shyly, he handed out leaflets about the dangers of ‘free mixing’ making clear his preference for separate seating areas for men and women. The following day he had leaflets on how women are expected to dress which he shared with Mehren. As the days progressed, Mehren refused to take the easy option of yelling at Haqq or reveling in hurt feelings. Instead, she showed polite restraint and the two, agreed to disagree in a way that showed some maturity and probably frustrated producers no end.

Openly gay Fehran chose for his suggestion of a daily event to invite a fellow gay couple to meet everyone. Predictably, Haqq left the room, so as not to be near his version of a spiritual nemesis, muttering something about throwing gays off the roof under his breath.

Rather like children in a candy shop, we sensed producers greedily clapping their hands, ‘Ooh she wants to take them to a bar to sing karaoke’ and ‘Perfect he’s handing out really daft flyers in the city center condemning the kuffar to hellfire!’ As is often the case, we Muslims can create battles with no need for external adversaries.

Light at the End

Meanwhile, amongst some scenes of entirely predictable bickering, touching moments still made the final edit.

Nigerian-born comedian Nabil helps to run a soup kitchen for the homeless. Inviting housemates to serve the poor was the single activity they all agreed upon with no quarrelling whatsoever.

Charity and ‘good deeds’ are still what unites us as Muslims.

A stupid argument about onions (yes really) took up far too much time in the final episode but allowed viewers to take away what was the point of the whole exercise. Namely, that Muslims can be as idiotic and petty as everyone else.

As low an aspiration as that may be, it is still a step up from the rhetoric espoused on radio and TV channels nationally of the “they’re waiting to slit our throats’ kind.

Being stupid, petty, quite nice and a bit pious, is a step on the road to one day appearing on national TV on our own terms and in equality rather than flora and fauna to be studied.