ISTANBUL – Thousands of Turkish people rushed to the streets to celebrate the failure of the military coup attempt in Turkey, supporting democracy and rule of law and chanting slogans in support of Turkey’s democratically-elected government.

“I congratulate all citizens who resisted the coup attempt,” Turkey’s Prime Minister, Binali Yildirim, said Saturday, insisting that the situation was “completely under control” after a night of shocking bloodshed.

“Right now, we’re focused on catching the perpetrators and bringing them to justice,” he added.

A minority group controlling some military assets, including helicopters and fighters jets, tried to wrest control of the country.

A helicopter controlled by coup plotters fired at civilians and threw bombs onto the grounds of the Parliament in Ankara.

Answering Erdogan calls to support democracy, thousands of people swarmed the streets to thwart the military’s advances to seize control;  many unarmed civilians carrying cell phones confronted tanks and military vehicles as clashes broke out throughout the country.

Some stood in front of tanks, much like the famous Tiananmen Square photo, to block the military from taking control of key areas. One man even lay on the street directly in the path of a moving tank at Istanbul Ataturk Airport.

Officials said 161 civilians or pro-government security forces were killed during the coup, along with an undetermined number of coup plotters. Another 1,400 people have been injured in the violence.

When parliament convened later in the day, the four main political parties – running the gamut from Erdogan’s right-wing, Islamist-rooted AK Party to the left-of-center, pro-Kurdish Peoples’ Democratic Party (HDP) – came together in a rare show of unity to condemn the attempted coup.

“This country was wracked with coups. We do not want to go through the same troubles. We’ll protect our republic and democracy; keep our commitment to the free will of our citizens.”

In a joint written statement, Peoples’ Democratic Party (HDP) co-chairs, Selehattin Demirtaş and Figen Yüksekdağ, said no one replaces himself as the national will. “HDP takes a stance against every coup in every condition.”

“There is no way beside protecting the democratic politics,” it added. 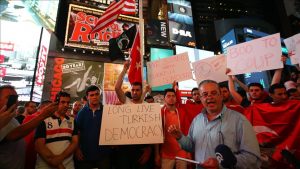 Turkish citizens in America and Muslim leaders converged on the white House on Friday to protest a coup attempt in Turkey.

“We are here to stand against the uprising against democracy in Turkey. We stand with our people of Turkey,” Yasar Colak, President of the Diyanet Center of America that was inaugurated by Erdogan in April, told Anadolu Agency early on Saturday, July 16.

Speaking to the press, Executive Director of Council on American Islamic Relations (CAIR) said he joined the group to send a message to the junta that he condemned any attempt to topple a democratically-elected government.

“This coup is not an assault only on democracy, it is an assault on national sovereignty of Turkey,” Nihad Awad said.

“As a person who graduated from an American University, I see that people in the US are trying to improve themselves by studying science. Those soldiers who attempted the coup have to change their mindset,” Turkish national Ahmet Yigit, 28, who owns a consultancy firm focused on business and trade and condemned the coup, said.

“Turkey is the only safe haven in the Middle East, where there is bloodshed. We, the Turkish people who live abroad, are behind our government and nation,” he added. 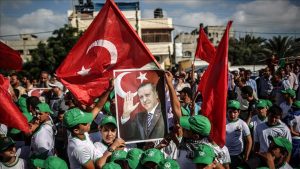 “News of the coup attempt came as a big shock,” he said. “But now the shock has turned to joy.”

Gathering people held banners reading “Gaza won’t forget those who stood by it”, in a reference to the Turkish government’s longstanding support for the people of Gaza.

“This is a message to our brothers in Turkey that the Palestinian people stand by you,” Yunus al-Astal, a leading member of Palestinian resistance movement Hamas, which has governed the strip since 2007, said.

Rallies also erupted in Lebanon’s southern city of Sidon where hundreds celebrated the failure of the coup bid in Turkey.

Some demonstrators performed dawn prayers in Tripoli’s Nour Square in what they described as an “expression of gratitude to God” for the failure of the coup bid in Turkey.