When Mohammed Isuf Ahmed from Aldgate, East London, received a rejection letter from Cambridge, he thought his dream of studying at a top university was over, IlmFeed reported.

Yet, it was only two weeks later when he received acceptance letters from two of the world’s top three universities – Harvard and Massachusetts Institute of Technology (MIT) in the US.

“I got rejected by Cambridge at the beginning of January and I was heartbroken,” Mohammed said.

“It was my dream to go to a life-changing university, and I honestly didn’t think I would get into the US universities if I couldn’t get in here.

“But then the MIT letter came and then Harvard. That was unbelievable, I still just can’t believe it. I have decided on MIT because it is the best university in the world for aerospace engineering.”

To the surprise of Mohammed, MIT offered him a £250,000 scholarship to study physics and aerospace engineering.

“I hope it inspires more East End kids, who might think they’ll just never get into these places, to apply,” Mohammed said, adding that he himself was inspired by Tafsia Shikdar who was accepted to MIT in 2017.

“This has only happened because I went to Newham Collegiate Sixth Form. We have very good sixth forms in Newham, but only one can say they have helped students into the very best universities in America.” 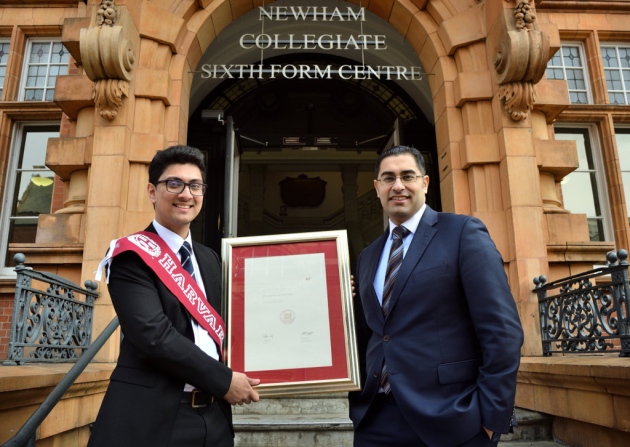 Mouhssin Ismail, who left a top City law firm to take up the role of Newham Collegiate principal, said: “This is the next step in our evolution.

“Our students are now looking beyond the Russell Group universities, beyond Oxford and Cambridge, beyond the UK.

“To have the choice between the two best universities in the US is not only an incredible achievement for Mohammed, but it is also a marker for every student at the NCS of what can be achieved.

Many Muslim students have made great achievements recently.

In January 2019, a young British Muslim student won a coveted £76,000 scholarship to attend the prestigious Eton College in London, UK – attended by the likes of Prince William and Eddie Redmayne.

A teenage Muslim Grade 12 female student won a $100,000 Schulich Leader Scholarship to study Mechatronic Engineering at the University of Waterloo in June.

Another British Muslim student who attends the University of Kentucky has been named a Rhodes Scholar, one of the most prestigious scholarships in the world.