Luc Ferrier is the Belgian founder of the NGO Forgotten Heroes. Ferrier, 53, swapped a career in the aeronautical industry to head a research team delving private archives in 19 countries for stories of Muslim soldiers in WWI.

Ferrier found his passion after discovering his great-grandfather’s diaries in which he wrote about “Mohammedans” he encountered whilst fighting in Northern France.

In six years, Ferrier has gained access to over 850,000 documents in English, Farsi, French, Urdu, Russian, German and Arabic, as well as uncovering hundreds of images of Indian and North African soldiers. The findings are released this year in a book: ‘The Unknown Fallen’.

During MFest held this weekend in London, Luc Ferrier spoke to Aboutislam.net about God-fearing men from North Africa and undivided India and his efforts for the world to recognize their stories.

Lauren Booth: How did you begin your quest for historic materials relating to Muslim soldiers in Europe between 1914 and 1918?

LF: I began with North African soldiers because these were the ones my grandfather was fighting with and of course a few from undivided India in the trenches of Northern France. The project grew very fast because the team was able to read the letters in local African languages, Portuguese and Urdu and Farsi and nobody had gathered his research in one place before. Most of the documents were in the hands of private people and foundations such as the Presbyterian church or the Quakers or hospital archives.

AI: Why was so little in the mainstream libraries or archives?

LF: After the war, the French said we don’t want to care about the documents so the organizations who had been present on the battlefields (church groups, hospitals) took them back with them to Australia, American, Canada, Morocco, Egypt, so we did a tour to seek them out. 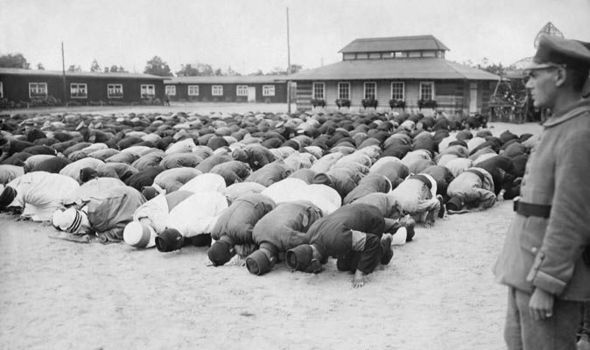 AI: Which moment moved you to carry on with an area of history that the Muslim world mostly prefers to ignore?

LF: There were many ‘Eureka’ moments. We found the letters from Allied officers desperately asking ‘what do I do when my Muslim brother-in-arms dies, what do I say, I don’t speak Arabic and have no idea what Islam is? How do I comfort him? We found a letter from the French Minister for war Alexandre Millerand (1915). Under pressure from the soldiers in the trenches he wrote a command that everyone serving under the Allies had to bury Muslims correctly.

Just a few months after the start of WWI the command was sent out that the soldiers had to say: ‘There is no God but God and Muhammed is the final messenger of God’ to any Muslim soldier dying. Place this in the context of France today! People need to think.

AI: Do you go into the schism between Muslim interests at the time opposed to the Ottoman, Turkish Caliphate?

LF: It is important to me just to bring these stories to light not to frame it or to explain it because if I did I had the feeling I would contaminate the letter of the soldier I had found. Because I didn’t know what happened to him before or after that moment of writing. And I don’t want to make a political case. That human being was in the trenches fighting for his life…

AI: Can you read us a section of one of the letters?

LF: This was originally in Arabic from an Algerian soldier. It gives an idea of the two wars the Muslim men were fighting. They were physically fighting in the trenches. But, they were also fighting for their identity, their dignity. This letter is about a young Muslim, around 17 years old, written by his officer for him (many were illiterate) during the harsh winter of December 1916. He writes to his father: ‘We are in a state language cannot describe! This country has been forsaken by Allah. Meat is brought to us in dishes and we don’t know if it’s permitted or not which is a source of trauma for me. You must tell me how I stand now in relation to Allah. I swear by Allah and that which we hold sacred: I will never abandon my faith even if I am assailed by ordeals more terrible…I’m inspired by Allah I ask him to help me stay true to Him and to save me.’ 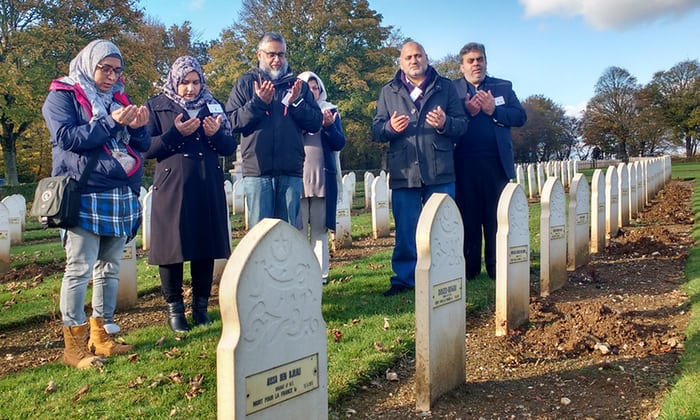 AI; He is freezing to death, facing hideous conditions and his main thought is to stay true to his faith.

LF: When people try to say they were mercenaries or ‘traitors’ (to the Ottoman caliphate) I get upset. They are not those things – they are human beings. Letters from soldiers from undivided India show the same ethical standards of the North African Muslim soldiers.

One Christian officer who fought beside the Muslim troops wrote: ‘Now I understand a little about Islam. I see we are Christian on a Sunday and then we go to the pub. But a Muslim is so when he fights, when he talks when they eat, it’s in their veins and you can’t get it out of them’.

We should publish that letter and speak about in schools if we did so we would all have a different idea about Muslims. It’s not the veil – it’s in their soul.

AI: Has this book changed how you see Muslims and faith in general?

LF: It has strengthened my faith in humanity and how powerful humans are if they want to be. A lot of people ask why as a Christian I pursue this research. I tell them: ‘If I were Muslim people would call this propaganda. Because I’m a Christian they don’t say that. It is meant to be like this.

LF: (laughs) I argue a lot with God I ask Him ‘what do you want from me?’ Then I have also been desperate for an opening like with the French Coroner who was not releasing his sources and at the last moment changed his mind and released them. You have to accept it.

AI: How has the Muslim world received your book?

LF: Sometimes I ask ‘why don’t the Muslims get behind this project?’ Then I say there must be a reason, I will find out one day. I accept. But I don’t give in.

To find out more and to buy the book go to https://unknownfallen.com/product/muslims-in-ww1

It is shipped worldwide.