Marathon is tough for everybody under all conditions, but if you’re an amateur runner and observing fasting,  you’d be taking grueling to a whole new level.

This is exactly the case of Tariq Mahmood as he raced 41.8 km across Peterborough on June 2, while fasting, Peterborough Today reports.

“I like to train during Ramadan. I go to the gym in the last hour before sunset,” said the 43-year-old man from Bretton.

Mahmood wanted to show others it’s possible to keep fit while observing Ramadan, as well as inspiring his three sons and raising a staggering £90,000 for families in Indonesia.

Fasting didn’t deter Mahmood who completed the marathon in four hours and 31 minutes, with more than 100 friends and family members.

He was joined by cyclists Christopher Coulter (first aid), Russell Khan (supporter) and Waqar Elahi (cameraman), with the event showcased live on Facebook.

“Lots of people say they don’t train as they find it too difficult. I thought I could do something. I started to do some research and it didn’t appear this had been done before,” he expressed. 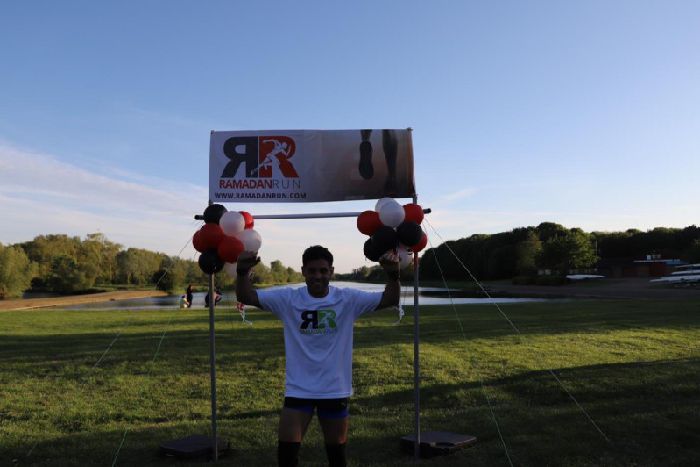 Tariq Mahmood completed a marathon while fasting for Ramadan

The Muslim amateur runner had never run more than ten kilometers in one go before starting his training for this challenge. After finishing the race, he had to wait another hour for sunset to break his fast.

The dad of three never doubted he would make it all the way; “the last two kilometers were tough because I had a niggle in my left knee,” he said, “but I just blanked it out. My motivation is my sons Aayan, 13, Layth, 10, and Feroz, 9. This is to show them anything is possible if you’re motivated enough.”

Money raised by Mahmood is going to the New Home New Start project, which is providing homes for families living in Sulawesi, Indonesia, where many don’t have adequate toilet or kitchen facilities.

He’ll soon meet landowners and builders and will be helping to build the homes. Moreover, the Ramadan Run will return next year but with a 3k, 5k, 10k, half marathon or full marathon for all people to take part in.

Peterborough is an English cathedral city with a population of 196,640 in 2015. About 56.7% of the city’s residents classified themselves as Christian in the 2011 Census. The city has a higher percentage of Muslims than England as a whole (9.4% compared to 5% nationally).

The majority of Muslims reside in the Millfield, West Town and New England areas of the city, where two large mosques including Faidhan-e-Madina Mosque are based.

The motivation behind Mahmood’s charity campaign is the fact that Muslims dedicate their time during Ramadan to get closer to Allah through prayer, charity, self-restraint, and good deeds.