LONDON – British Muslim Sir Mo Farah has registered the second fastest time in the history of the IAAF World Championships on his way to winning gold in the men’s 10,000-metre event in London.

“I knew at 12 laps to go when they went hard from there, I knew it was going to be tough,” Farah was quoted as saying by the official website of the International Association of Athletics Federations (IAAF).

“It was about believing in my sprint finish and knowing that I have been in that position before. It helped a lot having the experience. Anything is possible if you train hard. It was perfect tonight,” he added.

Farah, who crossed the line in 26 minutes and 49.51 seconds, won his third consecutive 10,000m title at the World Championships on Friday night.

The 34-year-old British athlete of Somali origin was tested hard in a fast race full of surges and ever-changing leads.

“People take my kindness for weakness,” he said, hitting back at the British base.

“If I was weak do you think I would have won? Don’t judge the book by its cover. A lot of times people say, ‘You are nice’, and try to take advantage but you have to be ruthless on the track.”

Friday’s race was the first time ever that seven athletes have run under 27 minutes in an IAAF World Championships.

Farah has achieved 10 consecutive global track titles and will make it 11 if he can also triumph in the men’s 5000m. 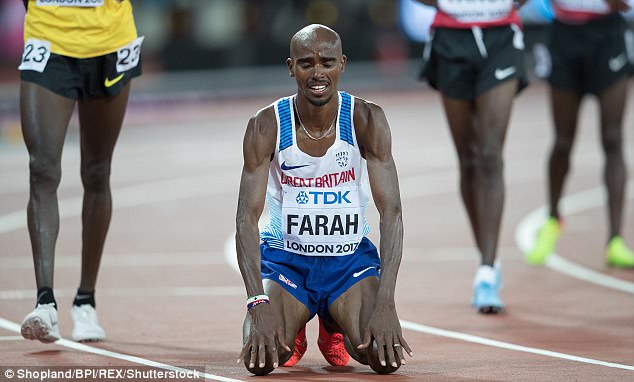 Farah, who was knighted in New Year honors, became Britain’s most successful track and field athlete when he won his third and fourth gold medals in Rio for the 5,000m and 10,000m.

Winning gold in 10,000m and 5000m races, Farah cemented his place as one of Britain’s greatest athletes with his double success four years ago.

Repeating the feat in 2012 and 2016, he became one of the world’s most successful distance runner in terms of major medals.

He was also awarded a CBE after winning two gold medals at the 2012 London games.

For many, Farah’s prayer can help counter the damaging stereotypes of Muslims held by many around the world, with his Muslim faith being central to his excellence in sport.