A Manchester Islamic High School for girls has been rated outstanding for the third year running in its latest glowing Ofsted report.

“Parents send their children here mainly because they want their girls to have both worlds. They want them to be proud of who they are, their own heritage, culture, religion, faith,” Mona Mohamed, the school headteacher, told Manchester Evening News.

“At the same time, to be a fantastic British citizen who contributes positively here. We have a lot of interfaith activities. It’s beautiful to be different.”

The independent prep school in Chorlton, Manchester, teach young Muslim girls how to stand up for themselves in karate lessons.

They also attend prayers in the prayer room and celebrate Mother’s Day with songs and cakes.

Alumni from the school have gone on to become successful professionals in all fields – from police officers to journalists, doctors, and dentists.

“We want to show we are not controlled by the men in our families. We are allowed to do what we want,” said 16-year-old Rahma Abbas.

“We are not going to leave high school and go back home. It’s always ‘choose the path that you feel is right for yourself’,” she added.

The girls are constantly out in the community to enrich their lives – they go to the theatre, football matches, volunteer at charities and take part in the Duke of Edinburgh award.

“People expect Muslim girls at a Muslim school to just be isolated and not in touch with the community,” said Jamila Kossar, leader for spiritual, moral, social and cultural development at the school.

“There are unfortunately some schools that isolate girls, or Muslim students, but I don’t think we are one of them.”

“Whenever there is anything going on in the world, they will be the first out there.

“The day after the Manchester Arena attack happened, about 20 girls took roses to Chorlton high street and gave them out to members of the public.

“There was a grandma there who had lost someone in the attack. 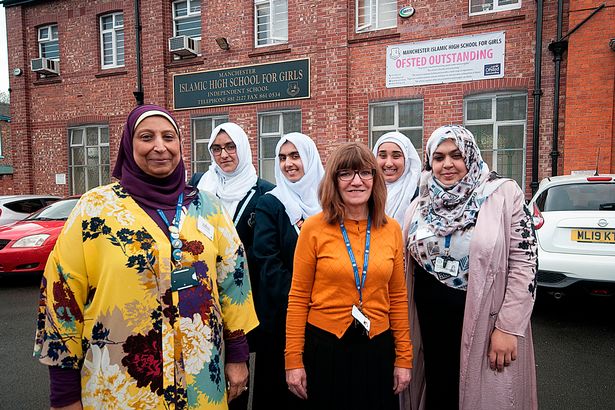 According to The Guardian, there are around 140 Muslim faith schools in the UK, twelve of them being state-funded. These schools regularly outperform those of other faiths.

For example, The Telegraph reported in 2008 that 86.5 percent of pupils attending Muslim schools achieved five GCSEs, compared to a figure of only 72.8 percent of Roman Catholic schools and 64.5 percent of secular schools.

According to the Association of Muslim Schools, the UK has different types of schools; Madrassas are those religious schools which are attached to mosques, while Full-time Muslim schools aren’t focused on the recitation of the Holy Qur’an.

For years, independent Islamic schools remained at the top score of UK GCSE results, setting an example for faith schools as successful, highly-achieving and inspiring educational institutes in Britain.