LONDON – One of the many treats the first ever MFest (Muslim arts and literature festival), delivered last weekend was a session titled “The Caribbean Ummah.”

An hour-long visit to an Islamic heritage on islands of the Caribbean Sea. It delivered more diversity than sun, sea, and sand.

First a ‘cheat sheet’: The Caribbean is a chain of islands forming, the Antilles. This is a 2400 km archipelago stretching from Cuba in the North and to Trinidad in the South. The Antilles and neighboring Bahamas comprises the West Indies.

The total population of the region is around 43 million and the Muslim population is estimated at half a million with 5,000 Muslims in Jamaica (according to the census). There are about 400 mosques.

Historians have identified a Muslim presence there from the time of Columbus’ early expeditions which were, by the way, steered by Andalusian sailors of Moorish, Muslim, heritage.

After this West Africans, kidnapped from their Muslim lands, who survived the horrors of Transatlantic Slave Trade, arrived with their belief in la illaha ilallah, Mohammadu Rasullah [There is no God but Allah and Muhammad is His messanger].

This is far from the whole story.

Jamaican rapper, hip-hop artist and academic Muneera Williams and playwright and campaigning journalist, Hassan Mahamdallie, have family heritages in Jamaica and Trinidad respectively. Together they outlined the rich diversity of the region and how Islam there looks and feels today.

Mahamdallie who writes on race and black history outlined the islands social makeup.

“Muslims are one facet of the regions diversity,” he said.

Add to this the descendants of the slave owners, refugees, and descendants of free Afro Carib populations and you get close to the kind of diversity and integration between groups that Europe finds so difficult to comprehend on its own shores. 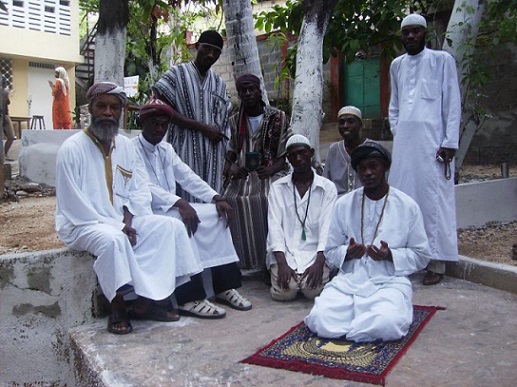 Sister Muneera talked fondly of her father’s daily habits which despite identifying himself as Christian, she feels, clearly points to a bygone family link to Islam. Her father performs ablutions “like a Muslim” and has other mannerisms she recognizes from her faith.

“My dad is a Muslim only he doesn’t know it,” she laughs.

This invisible morphing of traditions into a current culture reflects the habits and practices of the regions historical leaders too. In the public space too ther there is more which evidences prior Islamic culture and worship. These include the fact that at one time civic leaders would prostrate at the signing of treaties and offer greetings of peace at the start of council meetings.

In her 2003 research paper: ’Invisible Yet Invincible: The Muslim Ummah in Jamaica’ Sultana Afroz writes:

“The current invisibility of the Muslim Ummah (community) in Jamaica is overshadowed by the historic role played by the al-Andalus Muslim mariners in the discovery voyages of Columbus. The country’s coat of arms, ‘Out of Many, One People’, embraces the Ummah under the broad spectrum of its historical diversity.

By nature Caribbean people are Muslims

Muneera Williams is one half of the rap and poetry duo “Poetic Pilgrimage.” From West London, she remains culturally shaped and “in love” with the spiritual diversity creating the tapestry of life in the Jamaica which her parents left for the UK as part of the Windrush generation.

“It’s a spiritual country,” she says, “Rasta men are so welcoming to Islam and Muslims there. The Masjid (mosque) is deeply embedded in the community, a place of sharing and solace for everyone whatever their faith. By nature Caribbean people are Muslims. This is island culture, whereas here in the UK, it seems really restricted.”

If Islam were a destination it would be a cluster of Caribbean Islands.

The Caribbean true to its status as a place of ease and welcome to the maritime travelers simply enveloped different holy days into mainstream society, in a way everyone still enjoys.

There are Hindu and Sikh communities live there too, also of many generations of age. What appears not to have been imported from South East Asia was any sense of sectarianism.

The early Shiite Muslims in Trinidad left a practice which is still a festival to this day. The festival of Hosay, from the Arabic name “Hussayn” commemorates Ashura.

While the majority mainstream Sunni Muslims do not identify with this festival and its practices, several Trinidadian and Government institutions still promote the festival as part of its cultural heritage during the Islamic month of Muharram.

Bands of people tour the streets carrying brightly colored “Tadjahs” replicas of the tombs of the grandsons of the Prophet Muhammad. The procession goes through Port of Spain every year.

Non-Muslims take part as it is now their cultural heritage as well.

In the wake of the UK government’s Windrush scandal, in which British citizens from the islands without ‘correct paperwork’ were en masse grouped as ‘foreigners’ treated to a ‘hostile immigration policy, Hasan Mahamdallie makes this plea.

“When we look at the Caribbean can we please have some subtlety and diversity of the way we see the people and the islands?”

Enlightened attendees came away with sister Muneera’s stunning soundbite embedded in our hearts. It encompasses the beauty of an island Islam shared in harmony between people of all cultures and faiths.

“If Islam was a destination it would be a cluster of Caribbean islands.”