Hasan Patel, 16, had to go through a gruelling three-day assessment (Image: SWNS)
aaa

A young Muslim student is over the moon as he has achieved the high GSCE results required to secure a prestigious £76,000 Eton scholarship he won earlier this year, Mirror reported.

“I was really nervous this morning when I came to get my results but it turns out there was nothing to be stressed about,” Hasan Patel, 16, said.

“I’m just really happy to have got into Eton.”

To confirm his place at the prestigious school once attended by the likes of Princes William and Harry, he had to score grades 7 and above in his GCSEs.

He got three 9s, three 8s and three 7s in his exams, the equivalent of A or A* under the old system.

Your boy from Leyton is going Eton college. I got the grades I needed and I’m happy. If you can’t be happy for me please stay off my Twitter and moan somewhere else!

Moreover, he had to go through a grueling three-day assessment that included three entrance exams, seven interviews, and a group interview.

“My school pushed me to apply for a scholarship, I would have never even applied, let alone get in had I been on my own,” he said.

“Now I want to use this opportunity to further myself academic career and build confidence in myself.

“I’m so thankful to George Mitchell because they help each student pursue whatever their interests or talents and achieve whatever they want to do in the future.” 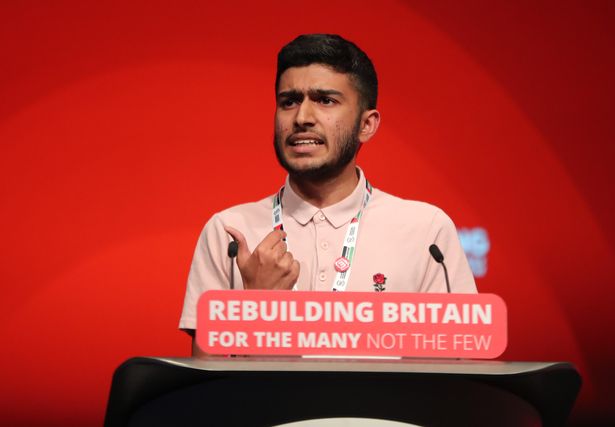 George Mitchell Headteacher Saeed Hussain said: “We are so proud of Hasan and what he has achieved. He has knuckled down and got the grades required to secure his place at Eton.

“This is an extremely talented, extremely bright young man with a huge future. He is a shining example to all young people that no matter your background, with the right support, there are no limitations.”

Hasan’s dad Abdul said: “I never thought when I left India in 1972 that my son would end up going to the same school that the English royalty have been to.

“All of his family are so incredibly proud of him and what he has achieved.”

In 2018, Patel was the youngest person in the UK to speak at a political party conference, where he delivered a speech to London Labour leaders.

Winning the Eton scholarship earlier this year, the young Muslim said he was called “traitor” and “hypocrite”.

The teenager clarified that some critics mocked him a “champagne socialist” for accepting the scholarship.

“I’ve been called a ‘champagne socialist’ because I’ve been offered a scholarship to Eton College. First of all, I’m Muslim and most of us don’t drink. Secondly, my free school meals don’t serve champagne,” he said.