AMSTERDAM – A Turkish-Dutch organization, Milli Görüş, took part in an international campaign called ‘Hello, We Are Muslims’, aimed at getting in touch with people across Europe, and handing out white roses to passersby.

“The reason why I wanted to be a part of this campaign is because I see anti-Islamic hatred on the rise,” Musab Uluçay, 20, told AboutIslam.net.

He is one of the volunteers who handed out free roses on the streets of the capital Amsterdam.

Uluçay is one of about 200 volunteers who were handing out white roses in multiple cities in the Netherlands during the weekend. 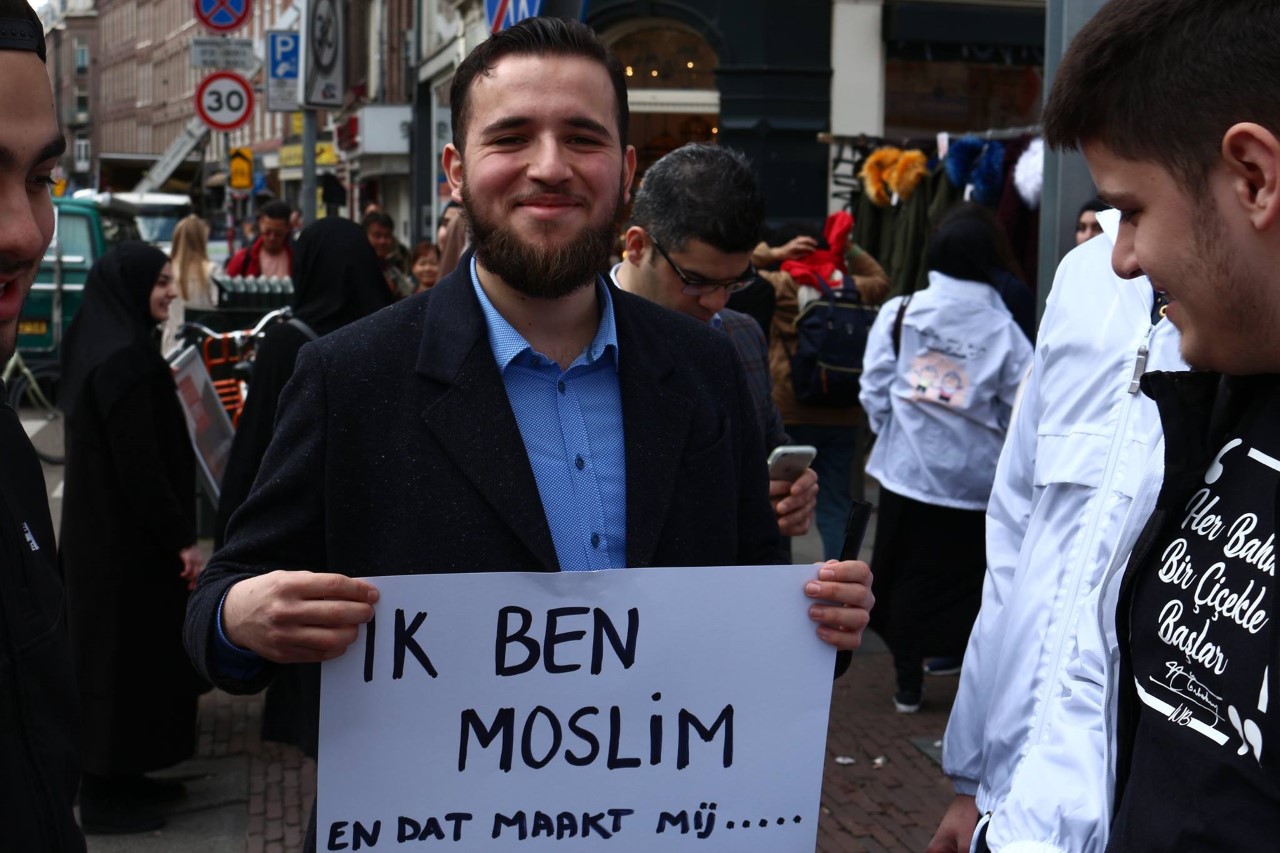 Uluçay is one of about 200 volunteers who were handing out white roses in multiple cities in the Netherlands during the weekend.

In total, an estimated 25.000 roses were handed out in the Netherlands alone, while the Mili Görüş-campaign was executed in multiple countries on the same day.

“I thought it would be a nice gesture towards all other citizens and I felt it could have a positive impact,” Mutahar Mirza, 20, explained to AboutIslam.

“The most beautiful encounter was with an older woman who was really touched by our gesture. Emotionally, she explained that there will always be people who do bad things on all sides. She explained she is a Christian herself, but that she was happy with us as Muslims as well and accepted our rose.”

Many non-Muslim Europeans have explicit opinions about the position and legitimacy, let alone the future of Muslims in these countries.

At the same time, research shows that a large portion of the society doesn’t have any present or past personal contacts with Muslims. 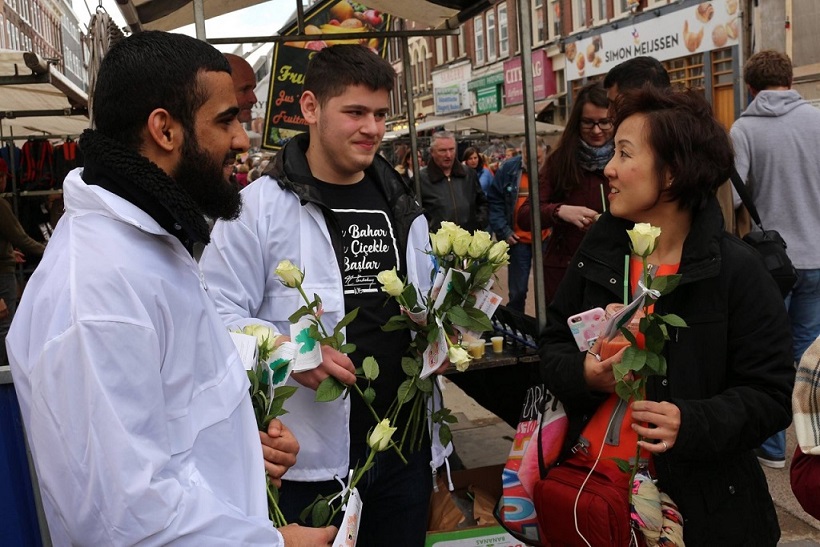 “I thought it would be a nice gesture towards all other citizens and I felt it could have a positive impact,” Mutahar Mirza

Although Milli Görüş is an organization with Turkish roots, the volunteers were drawn from all different backgrounds. Some Turkish, like Uluçay. Some Pakistani, like Mirza. Also, native Dutch converts took part in the campaign.

“I had a conversation with a tourist from Portugal,” Uluçay said.

“I explained to her that many people link Islam to terrorism these days. I told her I don’t mind when people disagree or even attack me as a person, but please keep my religion out of this. Islam stands for peace, love and respect. She thought about it and answered that in her view, campaigns like ours should not be necessary because in the end we are all human being.”

While only an approximately 5 per cent of the population in the Netherlands is Muslim, news media puts focus on Islam and Muslims daily. 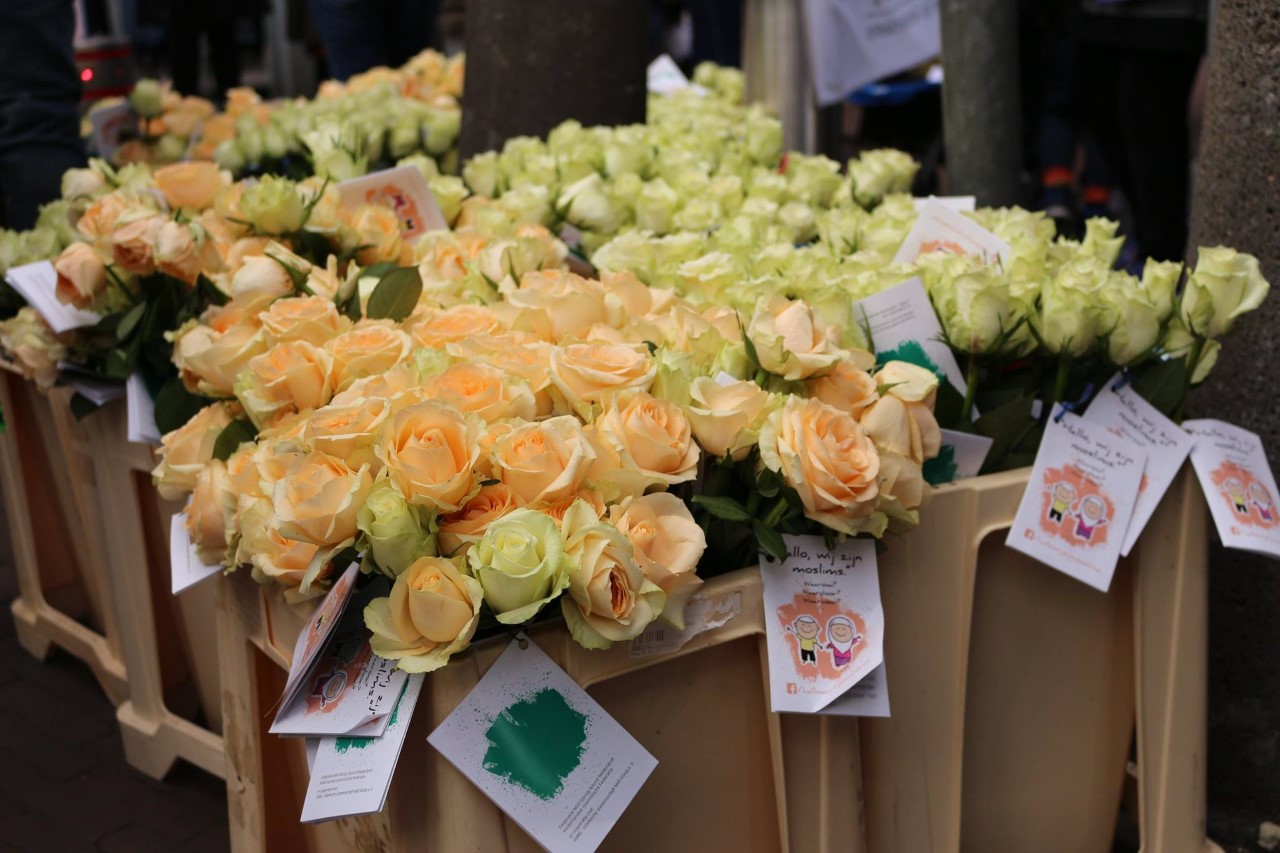 Since most news is negative, so is the news about Muslims. However, both local and national media outlets have published very positively about the campaign.

The Amsterdam news channel ‘AT5’ interviewed enthusiastic responses of people who walked away with roses in their hands.

National newspapers like the Volkskrant and Algemeen Dagblad published positive articles and moving pictures, proving that there can also be media attention when Muslims gather for positive dialogue and friendly gestures.

“I think it has been a successful day. I have not received any negative feedback whatsoever. In fact, many people whom I’ve talked to stated that they wished a campaign like this would not be necessary at all,” Uluçay stated.

“I hope that we have opened a door for people to get to know our faith in the best and correct way.”

Mirza adds: “Also, I have seen only positive responses in the media and on social networks and I have received many positive feedback from friends and family members. I hope it is a step towards more positivity!”