LONDON – Promoting peace, mutual understanding and breaking fears and prejudices against Muslims, a Europe-wide event was launched in London’s central King’s Cross Station on Thursday, where volunteers handed out roses to the public.

“This week, the Islamic Community Milli Gorus (ICMG) organization will have thousands of young Muslims living in Europe, Australia and Canada, out on the streets delivering their ‘Hello, I am a Muslim’ message to introduce themselves,” a press release, cited by Anadolu Agency, reported.

“Contacting people individually is the most natural and the best way of promoting understanding and empathy,” the release issued by ICMG said.

During the event, young Muslims’ stood in front of King’s Cross station, talking to people who wished to know more about the event and Islam. 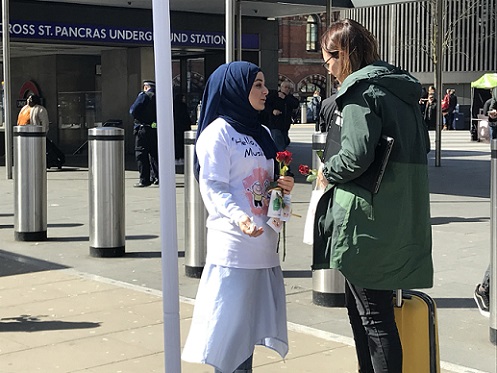 “We have prepared the ‘Hello, I am a Muslim’ events to encourage mutual communication and co-operation between Muslims and non-Muslims,” said Kemal Ergun, the group’s president.

Planned in several cities across Europe, the event will see young Muslims promoting mutual understanding in public places in various countries including Germany, the Netherlands, France, and Austria.

The event will also see the participation from more than 500 mosques across Europe, according to the ICMG statement.

A similar event was organized May 2017, by the Turkish-Dutch organization, Milli Görüş, in The Netherlands.