Police inspect the front of a mosque in Dresden, Germany on September 27, 2016, one day after an improvised bomb destroyed the entrance. REUTERS/Matthias Schumann
aaa

DRESDEN – Security has been stepped up in the German city of Dresden, following two bomb attacks on a mosque and a conference center Monday evening, which was blamed on xenophobia.

“Even if we so far have no claim of responsibility, we must go on the basis that the motive was xenophobic,” Horst Kretzschmar, president of Dresden police, said in a statement cited by Reuters on Tuesday, September 27.

Two improvised explosive devices detonated outside a mosque and congress centre in Dresden just before and after 10pm on Monday.

No one was hurt by the blasts although the imam of the mosque was inside the building with his wife and sons.

Imam Hamza Turan told Sächsische Zeitung newspaper that six bottles filled with explosive gas had been found at the site of the attack.

“They attacked us because they hate us, because we are Muslims”, Turan’s 10-year-old son told the local paper.

The bombings come ahead of next weekend’s German Unity Day celebrations, which German Chancellor Angela Merkel is expected to attend.

The celebrations mark the 26th anniversary of the reunification of East and West Germany.

Kretzschmar said police believed there was a link to the celebrations. 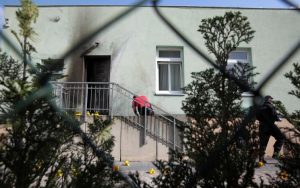 Stepping up security, he said three mosques, a Muslim social centre and a prayer room would be given protection immediately.

“We have now switched to crisis mode,” Kretschmar said, as police deployed to guard the city’s two mosques and an Islamic cultural centre.

Dresden was the cradle of the anti-Islam PEGIDA grassroots movement whose weekly rallies attracted around 20,000 supporters at the height of its popularity at the start of 2015.

The influx of about 1 million migrants, mostly Muslims, to Germany last year has increased social tensions, especially in eastern Germany where there have been some high-profile attacks on refugee shelters.

Support for the Alternative for Germany (AfD) party, which says Islam is not compatible with the constitution, has risen due to Chancellor Angela Merkel’s open-door refugee policy.

Mehmet Demirbas, founder of the mosque that was hit, said the Muslim community had been expecting some kind of attack for a long time.

“Glass panes have been broken in the past, or graffiti on the wall. But this is the first time something like this happens. Hopefully it will be the last time and we carry on happily living in Dresden,” he said.