BERLIN – Eighty years after the Nazis destroyed a Berlin synagogue, a Muslim politician and a Jewish leader are joining hands to rebuild it and build new bridges of mutual understanding in the society.

“I wouldn’t be a good Muslim if I didn’t champion Jewish life in my home city, Berlin,” Saleh, who came to Germany from the West Bank with his family when he was 5, said.

“And a Christian wouldn’t be a good Christian, either, if he didn’t intervene when a woman’s hijab is being torn from her head.”

In a city which has many mosques, Saleh has been working to rebuild the synagogue in Kreuzberg, the site of a worship hall that was largely destroyed by the Nazis on the November night in 1938 known as Kristallnacht, as a gesture of inclusion. 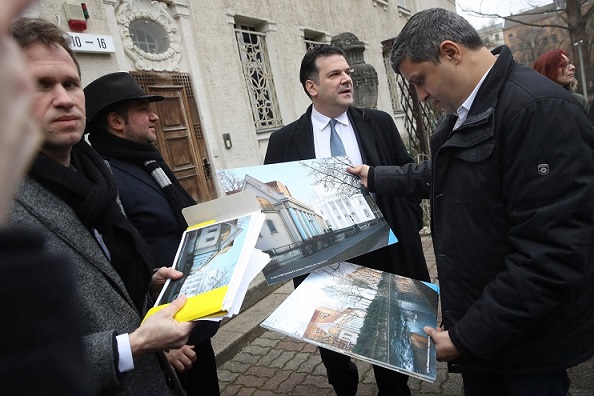 Raed Saleh, right, a leader of the Social Democrats in Berlin’s state parliament, examines drawings of the proposed restoration by architect Kilian Enders, left, on March 15

For Saleh, the Fraenkelufer project is a way to build on signs of openness.

“We want to send a signal that Jewish life is part of German dominant culture,” he said at the plan’s presentation with Gideon Joffe, 45, chairman of the Jewish community in Berlin.

“You can only meet hate and discrimination by opening doors and reaching out.”

The project, which will cost an estimated $31 million, is still unfunded, but Saleh and Joffe are seeking support from the city, foundations and private donors.

For the city’s Jewish population, the German Muslim’s effort is highly symbolic.

“The possibility of a reconstructed building is hugely significant for us,” said Jonathan Marcus, 37, son of Mario Marcus, a 67-year-old retired surgeon who has attended services in the side wing.

“The last member of our community who remembered the old building died a few weeks ago. How do we make sure people remember now?”