PARIS – Anticipating the second round of presidential elections, leading Muslims groups have thrown their weight behind centrist candidate Emmanuel Macron, calling on French Muslims to vote massively to block ideas of “xenophobia and hatred”.

The Union of Islamic Organizations of France (UOIF) called on Muslims in France “to go beyond their political opinions, not to slacken on this occasion, and to vote massively to block the ideas of Xenophobia and hatred” represented by the National Front, Saphir News reported on Tuesday, April 25.

Consequently, the federation calls for “giving the candidate Emmanuel Macron the biggest score” in the second round of the presidential election, setting May 7 as “a decisive date to spare our country the adventure, the threat of division and A calm and fraternal secularism.”

He studied Philosophy at Paris Nanterre University, and graduated from the École nationale d’administration (ENA). Later he became an Inspector of Finances in the Inspectorate General of Finances (IGF).

In 2014, François Hollande appointed him to be the Minister of Economy, Industry and Digital Affairs for two years, then in 2016 he established his socialist centrist liberal party En Marche (EM).

His program is based upon economic reforms and pro-European cooperation.

The centrist, who has pro-business, pro-European views, will face far-right leader Marine Le Pen in the May 7 runoff of the presidential election. 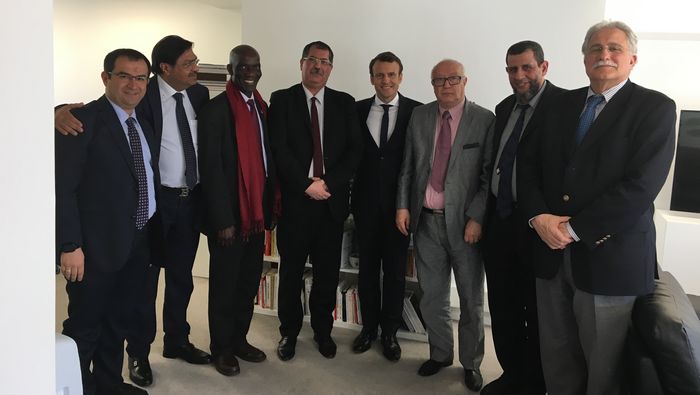 The UOIF’s endorsement of Macron came one day after the rector of the Grand Mosque of Paris and its National Federation (FGMP) urged French Muslims to vote for Macron.

The CFCM, which met Emmanuel Macron on April 19, “invites Muslims from France to mobilize to ensure the values of openness, fraternity and solidarity”.

It calls on Muslims “to remain united in order to defeat the processes of exclusion and hatred, as well as the ambitions of amalgamation and stigmatization that threaten national cohesion.”

During their meeting, Emmanuel Macron had “reaffirmed his attachment to a secularism that guarantees the freedom to believe or not to believe, and which protects the free exercise of Muslims” had “called to avoid any” hysteria “of the public debate on these issues.”

Before the first round, the CFCM had asked the main candidates to discuss their proposals around secularism and the management of Muslim worship, with the exception of Marine Le Pen, expressing his refusal by principle to meet a leader of extreme far-right party.