PARIS – A Malian Muslim immigrant has been hailed a national hero in France after scaling a building to save a four-year-old baby; he has also been granted honorary citizenship and a job as a fireman.

“Congratulations to Mamoudou Gassama for his act of bravery that saved the life of a child,” Paris mayor Anne Hidalgo tweeted, The Telegraph reported on Monday.

“He explained to me that he had arrived from Mali a few months ago dreaming of building his life here.

“I replied that his heroic gesture was an example for all citizens and that the City of Paris will obviously be keen to support him in his efforts to settle in France.”

Hidalgo also lauded the 22-year-old’s heroism and said she had called him to thank him in person.

She hailed him as the “Spiderman of the 18th”, a reference to the Paris district where the rescue took place on Saturday evening on a street in the north of the French capital.

President Emmanuel Macron invited Gassama to the Elysee Palace on Monday morning to personally thank him.

After the meeting, Macron announced that he would be granted French citizenship and join the French fire brigade. 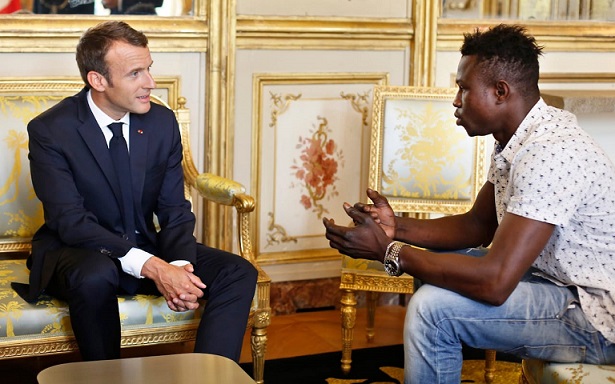 Gassama told journalists he had been in the vicinity when he saw a crowd gathered in front of the building.

“I saw lots of people shouting and cars beeping. I saw that the child was going to fall from the balcony.  I did it because it was a child,” BFM TV quoted him as saying.

“I climbed… Thank God I saved him.”

“When I got the child, he was crying. I asked him where his mother was. He replied that she was at a party,” he added.

The Parisian fire service said crews had arrived to find the child had already been rescued.

“Luckily, there was someone who was physically fit and who had the courage to go and get the child,” a spokesman told AFP news agency.