Algerian soldiers on the way to the western front arrive in Paris in 1914. Photograph: Photo 12/UIG via Getty Images
aaa

NOTRE DAME DE LORETTE, France – At a time of rising anti-Muslim sentiments, a European foundation is delving into history to tell the stories of the forgotten Muslim heroes who fought for freedom in Europe a century ago.

“The far-right and Islamophobia is on the rise throughout Europe. Our project is about making all people across the continent understand that we have a shared history,” Luc Ferrier, the founder of the Forgotten Heroes 14-19 Foundation, told The Guardian on Sunday, November 12.

“This is not about politics or colonialism. We are simply presenting the facts because this is a story that the whole of Europe needs to know.

“Muslims are portrayed as the enemy within, that they are recent arrivals who have never made a valuable contribution to Europe. But we can show that they have sacrificed their lives for a free Europe, have helped to make it what it is and that they have a right to be here,” he added.

Ferrier, who is not a Muslim, and other researchers have been looking into military, diplomatic, and private achieves over the past six years to document the participation of 2.5 million Muslims in WWI with the allies.

He started his researches after he came across his great-grandfather’s first world war diaries in his attic in which he wrote extensively about the “Mohammedans” he encountered in the trenches.

Gripped by fascination, Ferrier delved into the history books to learn more, before establishing his foundation in 2012 and devoting his life to documenting the role of all Muslims involved in the war. 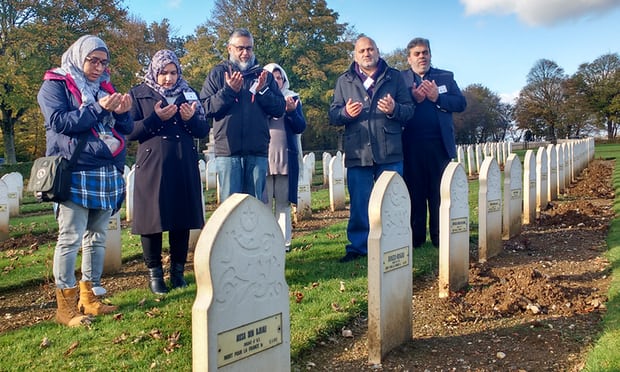 Central to the foundation’s ethos is spreading knowledge of its findings to young Britons and Europeans in particular, to help future generations better understand the Muslim communities living among them.

Last week, the foundation launched the battlefield tours, entitled The Muslim Experience in World War One, in partnership with Anglia Tours, a company that specializes in battlefield visits for British schoolchildren.

In addition to visiting the trenches, memorials and graves, and hearing the human stories behind them, the tour also includes a visit to the El Badr mosque in Amiens for a presentation on the foundation’s research, followed by a traditional north-African meal.

“We are trying to build bridges and what better way to do this than by sharing a meal and socializing together?” Yusuf Chambers of the Muslim Heritage Trust, which works with the foundation in Britain, said.

“Our work is focused on all communities and ages but particularly the young. We want people to know about this history because we want every British and European child to say that Muslims were heroes of the first world war too.”

Attending the inaugural tour, visitors listened to read out of letters sent from Muslim soldiers to their families.

One from an Algerian soldier stationed in the trenches around Notre Dame de Lorette in 1916 read: “I swear by God and by that which we hold sacred, I will never stop saying my prayers, I will never abandon my faith even if I am assailed by ordeals more terrible than those in which I find myself in.”

“It’s when you hear these personal testimonies that you really understand what these men went through,” Visitor Tayaba Shaukat, aged 25 from west London, said

“The experience of European soldiers in the first world war has been well documented by poets and other writers, but we don’t know anything about the lives of the Muslim and other colonial soldiers and this has to change.”