BRUSSELS – An avid traveler, Dutch national Michael Ruppert visited 60 countries in 4 years and eventually converted to Islam, after experiencing the faith with local Muslim families in Indonesia and Malaysia.

Ruppert first encountered Islam when he wanted to experience Ramadan with a local Muslim family in Indonesia.

“I thought it would be nice to spend the Ramadan with a local Muslim family,” he was quoted by WorldofBuzz.

“After searching on social media, I found Adin and wrote her a message. Surprisingly, she immediately invited me to stay 3 days with her family in Medan, Indonesia during the Ramadan.

This was the first time to meet his wife Adin Lubis, a 22-year-old Indonesian Muslim. 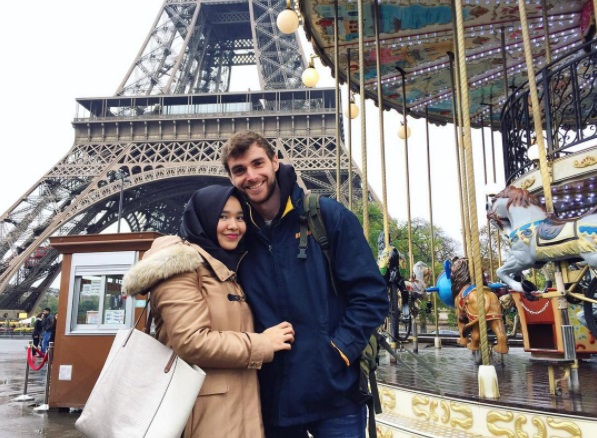 As a traveler, Michael never stay in hotels nor hostels, preferring to stay with local families, which he has done so for over 60 countries!

“Most of my host families in Indonesia and Malaysia were Muslim families. Those families never asked me to convert, but they just showed me their way of living. That’s how they triggered and inspired me to learn more about Islam and why I decided to take classes about Islam at local mosques in Kuala Lumpur and Jakarta.”

“While taking the classes, I still didn’t have the intention to convert. My teachers respected that and only insisted to show me more about Islam. After a few weeks of discussions, reading Quran and practicing how to pray, I knew that converting to Islam would be the right thing to do in my life.”

“I love her because she’s Adin and she loves me because I’m Michael. Our nationalities, the color of our skin and the place where we grew up have nothing to do with that. The fact that we’re from different cultures is actually a very nice bonus! We have so many things to show and teach each other,” he said.

“Soon we’ll be able to raise our kids with the best of both worlds.”