COLCHESTER – The Muslim community in Colchester, Essex, has donated half a ton of food to help those in need in one of the largest donations yet.

“The community center has the aim of making sure we help our local community and do as much as we can,” Shoomi Chowdhuri, from the Colchester Islamic Community Centre, told Gazette News Monday.

“This was a call to action for us to do something and everyone put in a lot of effort.

“Donations came in from all over Colchester and Ipswich, and that is how this amazing donation came together.”The supplies, which include 447.6kg of tinned food, rice, jam, fruit juice, toiletries, and crisps was about three times bigger than the average supermarket donation.

They were collected at Colchester Islamic Community Centre before being given to Colchester foodbank.

“It is a very large donation of almost half a ton, which we gratefully received this week,” Michael Beckett, Interim Manager of Colchester Foodbank, said, praising the generosity of the Muslim community.

“As a small local charity, we rely on donations from the public of food and indeed financial donations to help us, continue to provide emergency support for local people in crisis.” 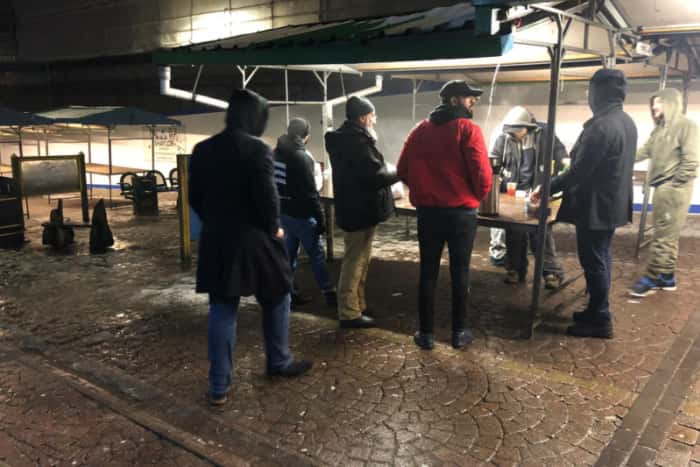 An Nasiha on the street’s of Sheffield.

Muslims in Sheffield, South Yorkshire, were also active in offering help to the needy during winter.

During the cold winter days, An Nasiha, a group which works locally and nationally to promote a better understanding of Islam in the United Kingdom, hit the streets to provide hot drinks and snacks to homeless people.

“Living in England you think that everyone has got money but you would be shocked if you came out on to the streets,” Group member, Naheem Khaliq, told The Star.

“You see reality and it breaks us up. We want other people to have what we have.”

“It is freezing cold but we have got heaters we can pay our bills. But there are people out here who are hungry cold and just need a bit of help.

“Biscuits and teas only a small initiative but small things can make a big difference.”

Organizers say they hope the event will become a monthly occurrence – and encourage others to take up the group’s message of ‘inspiration, guidance, and light’.

“When you are relaxed at home you don’t really think about the homeless but we want to help our local people,” a group member, Mashood Nazir, said.

“Our responsibility as good Muslims is to help the community – whether they be Muslims or non-Muslims – in their time of need.”