In this article, Dr. Asad, a British Muslim, reflects on his Hajj experience, sharing his thoughts on Umrah and Hajj, as he goes through the spiritual journey along with around 2 million Muslims from across the world.

We have arrived in the tent city of Mina to start our Hajj.

It took approximately 45 minutes by coach from Makkah. We were welcomed into our sleeping tent which houses around 150…Bruv this festival is bigger than Glastonbury with a total attendance of up to 2 million people.

We were each given a sofa bed to lie on. Once settled in our Maulvi Sahib advised us not to think about ‘worldly things.’

Kashan immediately turned to me and said ‘are we seriously swapping Sanchez for Sterling?’

Our sofa beds are approximately 5.5ft by 2ft and are consistent with the size of a coffin. Your stay here will hopefully increase your humility as you will be reminded of what you will have with you when you pass away:

Two cloths (your ihram) and a small spaced area to rest similar to the size of your coffin.

The stay here has been a reminder that we often own far too many things and when you break it down, all our worldly possessions will be left behind! Such a humbling experience!

Breakfast came in a small KFC box and was pretty good I must say. Corn flakes and pastries with honey etc.

‘We are proper glamping bruv!’

Today’s exercise has been to spend the day in the city of Mina and perform all five prayers. So far so good. Having a fantastic time!

It is really nice having a good friend to talk to. My advice is when you get round to booking your Hajj, try and do it with good friends and family. It’s a fantastic bonding experience and one you won’t regret as you will always be looking out for each other.

Also meeting a lot of familiar faces from London including friends of Kashan from East side in our area.

We are a community here and a solid one at that!

May all our pilgrimages be accepted by the grace of the almighty. 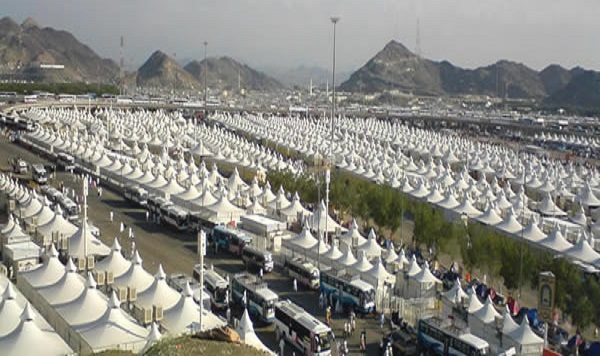 The facial water spray you’ll find useful in transit when the sun is beating down on you.

The economy of movement is key to avoid irritation.

Don’t take food with you from Makkah. So much food here in Mina you won’t have the stomach to eat it all. If anything maybe keeps some nuts with you +/- an orange and maybe a small bottle of water if you like

A Saudi sim is always useful to communicate with the respective ladies in your group. We were provided with a Lebara mobile sim by our tour operator, which has worked fine.

Tomorrow we travel to the holy grounds of Arafat.