LONDON – Thousands of women gathered in London for the third #WomensMarch, two years after the US President Trump’s inauguration in 2017, as a response to his shameless misogyny.

In 2018, the Time’s Up march took place under the banner of #MeToo. And the 2019 march’s theme, Bread And Roses, comes from a march which took place in 1912 when a Polish-born American suffragette, Rose Schneider, delivered a speech after the Triangle Shirtwaist Factory Fire in 1911, where 146 workers – mostly women – died.

Her most famous line, “The worker must have bread, but she must have roses, too.”

In memory, many carried roses themselves, while British Muslim comedian Sajeela Kershi, one of the speakers there to infuse a lighter note among the more serious contributions, wore a headpiece made of roses, embedded with toast – ideal headwear for London Fashion Week where a snack (of toast) would not be too far out of hand.

Amongst the organizers are two British Muslim women:

“Today thousands of ordinary women, allies, and people, came together to make their voices heard for the global #WomensWave protests. At Women’s March London, we were keen to elevate the voices of marginalized groups and grassroots activists campaigning on issues directly impacting women.

“We heard inspiring speeches from young women at Lambeth Youth Council, who are campaigning against catcalling to the eminent Helen Pankhurst. Women’s March London brings together diverse omen irrespective of their political affiliations, views on Brexit and across boundaries of faith, ethnicity, race, and sexuality.”

“I got involved in the WML so that I could make a difference to the lives of many women who can’t speak out. Seeing the crowds of people of all ages, backgrounds, and religions was the best thing today. WML has a universal message that resonates with many people. We believe in solidarity with those who are oppressed and face injustice.” 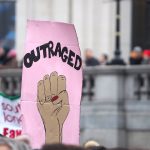 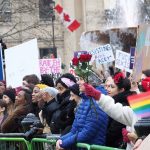 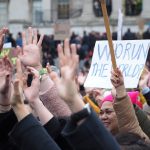 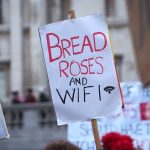 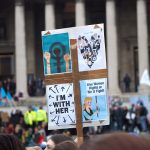 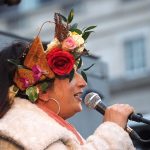 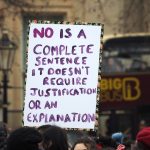 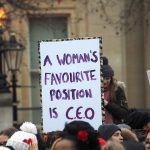 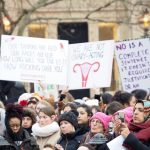 Just a few streets away from The White House in Washington, DC, for example, Muslim women chanted “From Palestine to Mexico, all the walls have to go.”

Speaking of this march, Jihan Shbat, the national events, and outreach manager for CAIR said, “It’s absolutely amazing seeing all these people here supporting each other. This administration has been seeking to divide us for two years, and I feel like every day we just come back stronger.”

The tradition of Muslim women speaking out and securing their rights can be found in the history of early Islam. Once incident related by Abu Dawood stands out particularly:

When Caliph Umar was walking with Al-Moalla ibn Garoud al Abdi, a woman from the tribe of Quraysh stepped out and said, “I knew you for some time when you were a young boy, then you grew up to be a man, then you grew to be the Prince of Believers (Muslim ruler). O son of al-Khattab! You have to observe your duty to God. Look after people’s affairs. The one who fears the punishment of God will be near to God, and the one who fears death will take every effort to stay away from doing wrong.”

Hearing this Al-Moalla rebuked her in an angry voice, “Beware! You servant of Allah! You have caused the Prince of Believers to cry!” But hearing this Caliph Umar interjected, “Shut up! Woe to you! Do you have any idea who she is? This is Khawla, the daughter of Hakeem, it is her argument that Allah in heaven heard. Shouldn’t Umar listen to her and take her advice?” Al-ʿIqd al-Farīd composed by Ibn ʿAbd Rabbih.

The lesson being that whoever is put in charge of our affairs, man or woman, must always be reminded of the importance of fairness and justice for all they represent. If our rights have been granted to us then there can be no cause for complaint, but when rights are withheld or denied, then it is our responsibility as human beings to pursue what is just and fair.

This is the wisdom behind the women’s march, an initiative for any and every woman to seek fairness, opportunity, justice, and freedom; the right to live without being harassed.

Our leaders are appointed to look after their citizens well being. In the absence of rights being established and delivered by our governments and our societies, then women and men will march for them.