CAMBRIDGE – Inspired by geometric design and landscaping found throughout the Islamic World, a British archtecturing company is erecting a timber-structured mosque in Cambridge, the UK, Arch Paper reported.

“The deceased architect David Marks viewed this mosque project as a shift from the preponderance of Ottoman-style mosques found throughout the UK,” a Marks Barfield Architects (MBA) official statement to The Guardian read.

The Cambridge Mosque Project, founded by Dr. Timothy Winter in 2008, purchased the one-acre site in 2009.

Allées of cypress and linden trees ring the mosque, which occupies a symmetrical eight-meters-by-eight-meters grid. The new Islamic worship house will be able to accommodate approximately 1,000 worshippers.

MBA saw an opportunity to design an Islamic center unique to the British culture, with a massing similar to the surrounding Georgian terraces, featuring a height of three stories, brick elevations, and a subtle dome rather than a towering minaret. 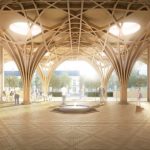 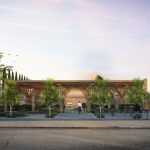 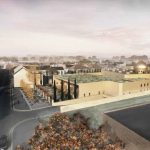 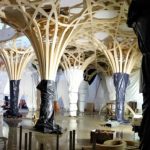 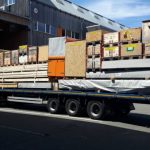 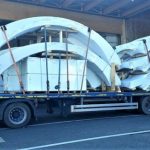 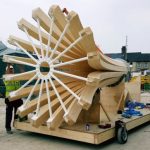 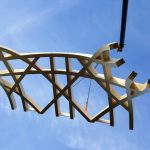 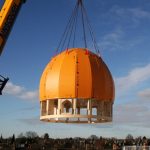 Each column flowers into a network of latticed arches and beams that is topped with a lightweight, 1,858 m2 timber roof. Rows of circular skylights are embedded above the supporting columns, allowing for the significant diffusion of natural light throughout the prayer space.

Design-to-Production (DP), a Zurich-based firm at the forefront of building information modeling, was commissioned by BLA to optimize the timber structural system’s geometry, establish a pre-fabrication and assembly strategy, and develop a comprehensive 3D model of the project.

Through parametric design, DP whittled down the project’s 6,000 structural joints to just 145 different timber parts. Then the firm plugged in their digital fabrication data to a five-axis CNC milling machine to mass-produce the timber components along with pre-assembly instructions and drawings.

After being transported 1,448 km over land and sea to the UK, the components were assembled in under a month. The onion-dome, with a base of arched clerestory windows, reaches a height of 30 feet and is placed atop the truss system made of glue-laminated beams. Construction for the project should wrap up in 2018 and will open in January 2019.

The city of Cambridge has three mosques which are Abu Bakr Jamia Islamic Centre, Omar Faruque Mosque, and the Cultural Centre in Kings Hedges. The three worship houses serve the city’s community of around 4,000 Muslims until the new mosque is complete.