In a nationwide celebration yesterday on April 13, Bosnia has opened its historic Sulejmanija Mosque, aka the ‘Ornamented Mosque’, in Travnik city, at the heart of the southeast European Muslim nation, Sarajevo Times reported.

“In the presence of a large number of Muslim believers and representatives of religious and political life in Bosnia, the colorful restored Sulejmanija Mosque was opened again,” Anadolu Agency (AA)’s correspondent said.

The historic worship house is considered one of the most important landmarks at the ‘City of Veziers’ as it’s nicknamed.

The mosque is characterized by its colorful decorations, frescoed façade and Islamic ornaments of Ottoman architecture style.

Remarkably, Sulejmanija Travnik mosque is the only mosque in Bosnia with its minaret rising from the left side of the building. Its current structure dates back to 1757, although it was largely reconstructed after a major fire in 1815.

The mosque’s colors have since faded but the building remains notable for the bezistan mini bazaar built into the stone arched arcade. In fact, there has been a mosque at Travnik’s center point since the 16th century, much earlier before the current refurbished structure. 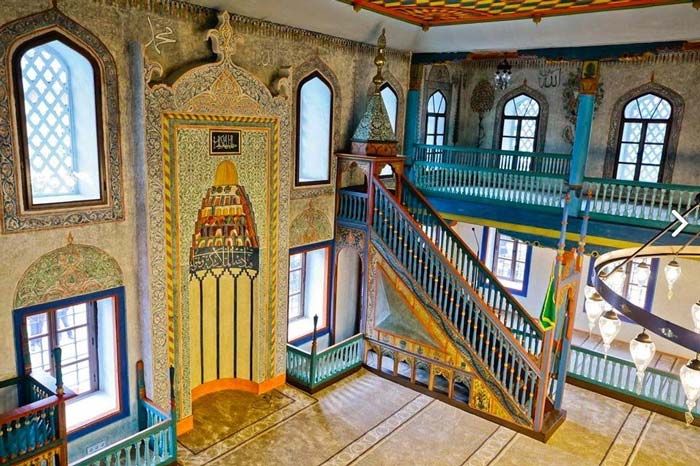 Miraculously, Sulejmanija Travnik Mosque survived the mass architectural and cultural genocide committed against Bosnian mosques and landmarks during the Bosnian Independence War between 1992 and 1995.

Many buildings were damaged or fully destroyed, with up to 80% of well-over 4,000 pre-war Islamic buildings and mosques.

According to the UNESCO and the ‘Commission to Preserve National Monuments of Bosnia’, the Muslim Balkans country lost the biggest majority of its Islamic worship houses and landmarks because of mass destruction.

Since independence in 1992, Bosnia has become one of the most frequently visited countries in the Balkans region, projected to have the third highest tourism growth rate in the world until 2020.

According to the 2013 census, Islam is the majority faith in Bosnia, making up 51% of the population. There are eight muftis located in the major municipalities: Sarajevo, Bihać, Travnik, Tuzla, Goražde, Zenica, Mostar, and Banja Luka.

Travnik is a town of central Bosnia at 90 km west of the capital city Sarajevo. As of 2013, it had a population of 16,534 inhabitants, while its municipality had 53,482 inhabitants.

Historically, it was the capital city of the governors of Bosnia from 1699 to 1850 and has a rich cultural heritage dating from that period.