LONDON – A Hijabi Muslim mother-of-four who has a black belt in kickboxing has been teaching Muslim women how to defend themselves amid rising hate crimes and Islamophobia.

“When I tell people what I do they are very shocked – it blows their minds. Everybody finds it fascinating, even Muslims find it fascinating,” Khadijah Safari, 36, told The Daily Mail.

“There is a lot of negative stuff in the media about Islam and women – there is this idea that Muslim women are oppressed.

“But a lot of that comes from the culture of countries where the majority of people are Muslim – not Islam itself.

“I’ve always thought it was important that I knew how to defend myself. What I do is about control, it’s about discipline, self-respect and looking after your body.”

Growing up in London to a non-Muslim white British family, she found herself drawn more to health, fitness, and martial arts.

Converting to Islam in 2009 at the age of 27, Safari married the man she was designing a martial arts website for the following year. Later on, the pair decided to set up a business together.

“Lots of people who view it negatively ask me ‘how can you encourage this? Encourage Muslims to segregate themselves from society? But I’m actually doing the opposite. I’m encouraging Muslim women to mix with non-Muslim women,” she said.

“We’re helping Muslims integrate more into the rest of society and I think that’s really beautiful. I’ve found non-Muslim women are just as keen to train with other women only. In our classes were all equal, our hijabs are off so there’s no Muslim or non-Muslim.” 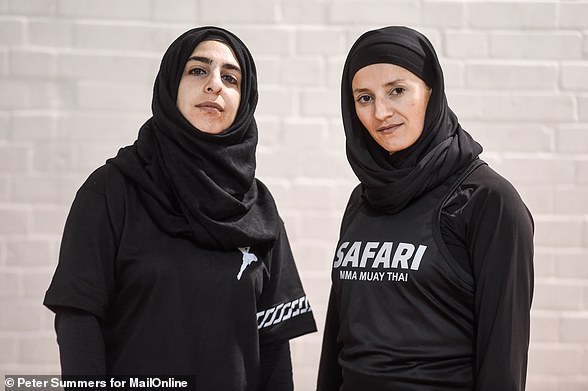 Safari hopes to encourage more women to give self-defense classes.

“I want to encourage other women to teach martial arts and do what I’ve been able to do. It’s really good for people who follow my religion because there aren’t too many sectors that are women only,” she said.

“I teach all over the country and do seminars and workshops everywhere but I can’t be everywhere at once.

“I’ve already trained nine instructors but I want to give more women that opportunity.”

In the US, Rana Abdelhamid has created a new self-defense technique against attacks involving grabbing hijab.

A similar effort was done by Nafiza Aziz in Toronto, who created a new hub for Muslim women empowerment, with the help of a hijab-wearing martial artist with black belts in karate and taekwondo.