After more than 180 years, Greek capital’s first formal mosque is set to open for prayer within months, Al-Jazeera reported.

“Soon the first prayers will be made by the imam. We hope that can take place by September,” Education Minister Kostas Gavroglou told journalists.

The long-delayed first state-sponsored mosque is likely to begin operating in September, about three years after its construction was approved by Parliament.

Located in Votanikos district, the mosque, which has neither minaret nor dome, was meant to be completed in 2017. It’s Athens’s first official mosque for centuries.

Greek authorities said on Friday that Athens would open its first official mosque probably by September when the €850,000 euro construction project is completed.

Tens of thousands of Muslim migrants live in the greater Athens area, and have been using informal prayer rooms in basements and disused stores.

Several Greek ministries and different services are involved in the construction of the new mosque; this includes the Ministry of Education, the Ministry of Infrastructure, the Municipality of Athens, even the navy, have been involved. 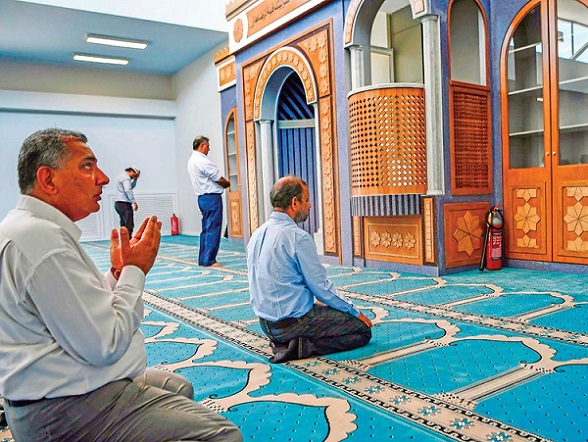 Muslim faithfuls pray in a mosque in Athens, the first official place of worship for Athens Muslims in over a century. Image Credit: AFP

The mosque has been greeted with relief by members of the capital’s Muslim community.

“I would like to start by thanking Allah that we finally have a mosque where we can pray, we can gather, we can talk about out matters,” said Zaki Mohamed, the mosque’s imam.

Ashir Haidar, a representative of the Shiite Muslim community of Greece, described the upcoming opening as “a dream come true”.

The Greek minister Gavroglou noted the Athens mosque, unlike most in Europe, was a public and not a privately owned place of worship.

“It doesn’t belong to anyone, because it belongs to all of us and all of you,” he said. “Here, the owner is not an individual, nor a community, nor a society nor a foreign country.”

Debates about the construction of a mosque in Athens started decades ago and until now, Athens remains the only European capital city without a mosque.

Since then, Muslims have resorted to praying in hundreds of makeshift sites, in crowded basements or dark warehouses targeted by racist attackers.

Plans to build a mosque began in 1890 with an act of parliament, but all fell through, including one time for the 2004 Olympics. According to Reuters, the Muslim community in Athens numbers about half of a million persons.