A new documentary will mark the achievement of a young British teen who made history by becoming the first Muslim female jockey to win a major race.

“I love proving people wrong when it comes to what a Muslim girl can or can’t do,” Khadijah told Metro.co.uk.

“For someone like me to have won a horse race and made history for British female Muslims feels very important. I hope that other young women will see my story and be motivated and determined to achieve their goals too.”

The 18-year-old Khadijah Mellah from Peckham made global headlines in August after earning historic victory at the Magnolia Cup.

The documentary explores the benefits that Ebony Horse Club is providing for young people in Brixton.

It culminates at the Qatar Goodwood Festival as Khadijah takes her place among a field of 11 other competitors in the Magnolia Cup. 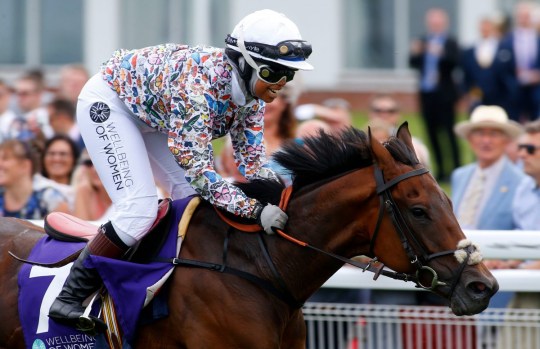 Khadijah has been riding at Ebony Horse Club in Brixton every week for more than six years. She just loves being around horses and the personal challenge that riding presents.

“After sitting my A-Levels I moved to Newmarket to ride out in the mornings and exercise the horses with other jockeys,” she explains.

“To get my race riding and fitness to where it needed to be, I needed to ride as often as possible.

“Riding a racehorse is quite different from riding the horses at Ebony Horse Club, racehorses are athletes so are built differently, they’re fitter and stronger than the horses I had been used to riding so I had to learn a new technique.”

Ahead of the release of the documentary, Khadijah had a special meeting with her hero, Egyptian runner, and founder of online community Surviving Hijab, Manal Rostom.

Like Khadijah, Manal is using sport to break down social stereotypes and empower young women and hijab wearers to follow their dreams.

Muslims are urged to teach their kids riding horses.

In a statement many Muslim scholars attributed to Umar Ibn El-Khattab, may Allah be pleased with him, he says, “Teach your children swimming, archery and horse riding.”

Islam encourages anything that promotes refreshing mind or revitalizing the body provided it does not lead to or involve sin, cause harm, or hamper or delay religious obligations.

The traditions of Prophet Muhammad, peace and blessings be upon him, undoubtedly encourage involvement in sporting activities as a way to promote a healthy lifestyle and encourage brotherly love and family togetherness.