BIRMINGHAM – In the largest `Eid celebration in Europe, more than 100,000 Muslims gathered in a single UK park on Sunday in Birmingham, to celebrate the Islamic feast and attend prayer.

“This celebration is one of the most important in the Islamic religious calendar and it’s an opportunity for us all to come together in peace and unity,” a spokesperson for Green Lane Masjid & Community Center, told The Telegraph.

“We’re all overwhelmed that so many people from different faiths and from across the world have travelled to Birmingham for this year’s Celebrate `Eid.

“We’ve been working for months with five local Mosques and our charity partner Human Appeal to organize the community for a memorable day of prayer, games and fun.”

The Celebrate `Eid event, hosted by Green Lane Masjid and Community Center, is now in its seventh year and has seen growing numbers since its first major event in 2012, where 12,000 people attended

Armed officers and extra patrols were on patrol after the series of terror attacks in Manchester and London, most recently near Finsbury Park Mosque.

Amer Ijaz, one of the event’s organizers, said they were “happy that they are here to reassure us”. 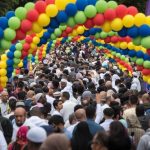 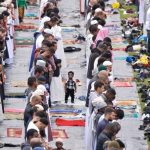 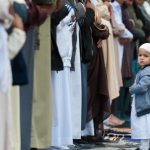 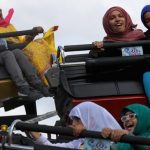 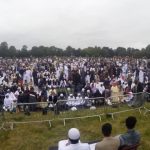 The `Eid celebration followed a charitable Ramadan month, in which generous Muslim worshippers raised £435,000 in a single night for international humanitarian aid charity Human Appeal, which comes just weeks after it handed over a cheque for £1.2 million.

The money will go directly to the Saving Syria project, which is raising funds for orphans in the war-torn country.

“It is a great honor once again for Human Appeal to be part of Celebrate `Eid; the biggest gathering of Muslims in Europe,” Othman Moqbel, CEO of Human Appeal, said.

“As well as tragedy throughout the holy month of Ramadan, there has been unrivaled generosity.

“British Muslims have given so much to help those in need here in the UK and around the globe.

“This `Eid we celebrate the generosity of the Muslim community.”

The three-day `Eid Al-Fitr festival is one of the two main religious celebrations in Islam, together with `Eid Al-Adha.