“This is the most deadly Islamophobic terrorist attack we have experienced in recent times,” Harun Khan, the secretary general of the Muslim Council of Britain, wrote.

“My condolences to the families affected. As the rest of us prepare to undertake our own Friday prayers today, we do so with the anxiety as to whether our mosques and communities are safe in the face of unabated Islamophobia and hostility against Muslims.

“I call on our government to redouble its efforts to ensure mosques are protected and call on fellow Muslims to resist the temptation to roll up the banners in fear, as this attack was designed to do.”

Police say 49 people have been killed and dozens injured in shootings at two mosques in the New Zealand city of Christchurch when at least one gunman opened fire on worshippers.

It’s the country’s worst ever mass shooting and has been condemned internationally.

The Council on American-Islamic Relations (CAIR) also mourned the deaths of the Muslim worshippers.

“To God, we belong, and to Him is our return. We mourn the heartbreaking killings of men, women, and children gathered for prayer in their houses of worship and urge leaders in our nation and worldwide to speak out forcefully against the growing anti-Muslim and anti-immigrant hate that appears to have motivated these white supremacist terrorists,” CAIR National Executive Director Nihad Awad said in a statement.

“In the wake of this tragedy, we urge mosques, Islamic schools, and other community institutions in the United States and around the world to take stepped-up security precautions, particularly during times of communal prayer.”

Video of the attacks has been posted online. CAIR is asking that the video not be shared.

“Instead of spreading the hate-filled message of terrorists, we should share messages of love and solidarity with the loved ones of those killed or injured in the attacks,” said Awad. 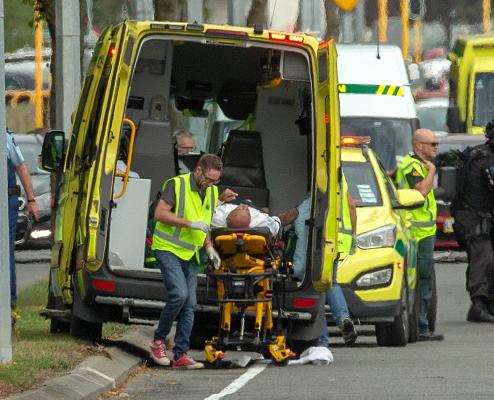 New Zealand Prime Minister described the shooting as one of the darkest days in the country.

“This is one of New Zealand’s darkest days,” said Prime Minister Jacinda Ardern. “Clearly what has happened here is an extraordinary and unprecedented act of violence.”

“There is no place in New Zealand for such extreme acts,” she said, describing it as a terrorist attack.

British Prime Minister Theresa May tweeted on behalf of the UK her “deepest condolences” after a “sickening act of violence”.

European Council President described it as a “brutal attack” that would never diminish New Zealand’s “tolerance and decency”.

On the other hand, US President Donald Trump said Friday he does not regard white nationalism as a rising global threat in the aftermath of mosque terror attacks in New Zealand that left at least 49 people dead.

“I don’t really,” Trump said in the Oval Office after being questioned about whether he views white nationalism as growing. “I think it’s a small group of people that have very, very serious problems, I guess.”

Indonesia’s foreign minister condemned the act carried out “especially at a place of worship”. Reports have suggested several Indonesians were inside at least one of the mosques.

The leader of the biggest party in Malaysia’s coalition government described it as a “black tragedy facing humanity and universal peace”.

Islam in New Zealand is a minority religious affiliation. Small numbers of Muslim immigrants from South Asia and eastern Europe settled starting from the early 1900s until the 1960s.

Large-scale Muslim immigration began in the 1970s with the arrival of Fiji Indians, followed in the 1990s by refugees from various war-torn countries. The first Islamic center was started in 1959 and there are now several mosques and two Islamic schools.

Islam is estimated to be the fastest growing religion among Māori natives of New Zealand. The national census figures show the number of Muslims of Māori ethnicity increasing from 99 to 708 in the 10 years to 2001, and to 1,083 by 2013 census data.

According to 2013 census data, there were 1,536 Muslims among the Pacific Islander community (a little under 3.5% of New Zealand’s Muslim population).