Hours after the atrocious terrorist attacks in Christchurch resulting in the murder of 49 human beings, three men drove past a mosque in east London shouting Islamaphobic remarks, calling those attending Friday prayers ‘terrorists.’

Some of the worshippers went after the car when it stopped, three men stepped out and they attacked one of the Muslims, a 27-year-old with a hammer.

Speaking of the incident, Neil Basu, the national policing lead for counter-terrorism said that “Whilst there is no intelligence linking these appalling events in Christchurch to the UK, additional uniform patrols will continue in London and nationally over the coming days, focusing on places of worship and specific communities.”

Part of me wonders whether it is good or bad that there is no connection. If there is a connection, at least, we can attribute it to a pattern of a hate crime. If there isn’t a connection, it shows how ‘normalized’ and ‘casual’ racism, xenophobia, and Islamaphobia have become in our nation, when citizens going about their business, in this case, attending a Friday service, can be attacked for no specific reason other than for being Muslim attending a prayer.

In response to Christchurch, there has been a huge outpouring of sympathy and statements from politicians across the board, including our own Prime Minister Theresa May who said:

“There can be no place in our societies for the vile ideology that drives and incites hatred and fear.” And from the opposition, Jeremy Corbyn, who said, “An attack on a mosque, a church, a synagogue, or a temple is an attack on all of us.”

As accurate as these sentiments ought to be, both of these politicians continue to be criticized, May for not acting on Islamaphobia in the Conservative Party and Corbyn for not acting on Anti-Semitism in the Labour Party. Worse, both leaders, under the guise of the ‘will of the people’ are delivering a political change, Brexit, which is a policy built around immigration as there is no single economic or political benefit for leaving the EU.

28-year-old white supremacist terrorist Brenton Tarrant explained his support of Brexit saying, “The truth is that eventually, people must face the fact that it wasn’t a damn thing to do with the economy. That it was the British people firing back at mass immigration, cultural displacement, and globalism, and that’s a great and wonderful thing.” 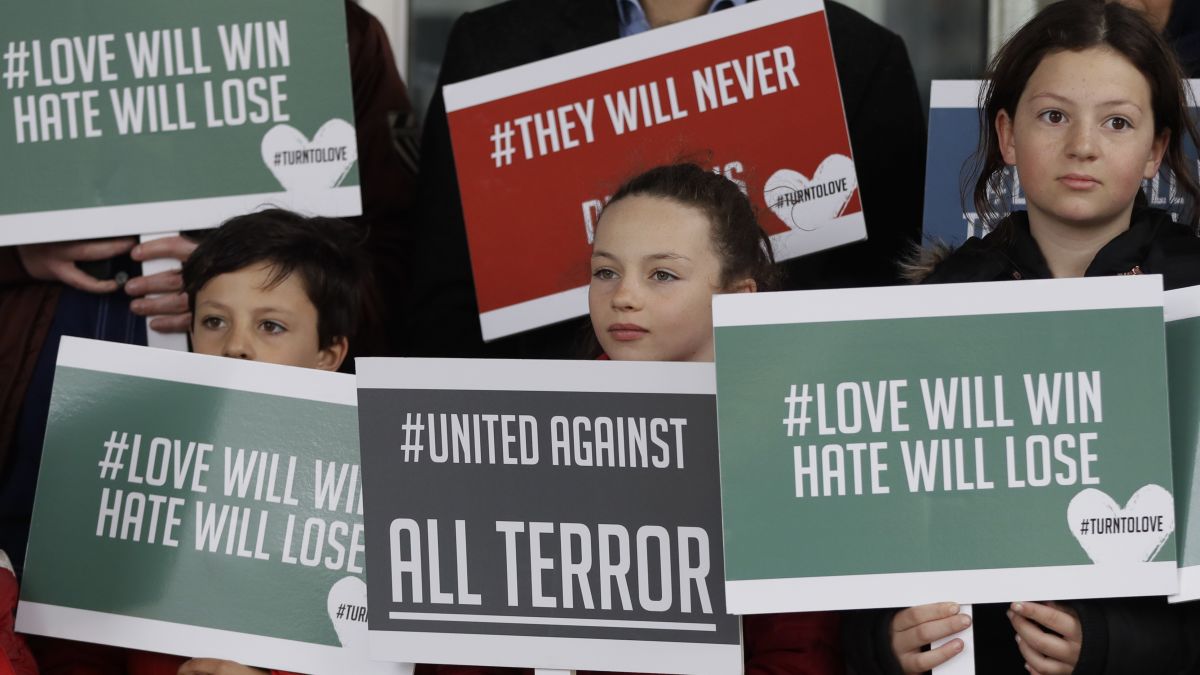 Increasingly, the white supremacist threat is being sidelined for the more convenient immigrant and Muslim narrative, or general hatred towards Jewish people, and other faith and race groups. For example:

3 at a Jewish center in Kansas

49 at a Mosque in Christchurch.

These are just the headlines, the hammer attack at a mosque in east London, for example, do not make the listing, it is too small, and was one of many where Muslims, Jews, and other faith and race groups are constantly being harassed, abused and in the worst cases, murdered.

So normalized is the anti-immigrant discourse in our political class, that our Prime Minister Theresa May was aware of and didn’t oppose vans roaming the streets of the UK targeting immigrants saying ‘Go home,’ part of her ‘hostile environment.’

Meanwhile in the United States, President Trump, just hours after the Christchurch massacre sent a tweet referring to migrants and refugees as ‘an invasion.’

"We are experiencing an invasion on a level never seen before in history."

“People hate the word invasion, but that’s what it is.”

Two quotes about immigrants in the past 24 hours. One from the US president, one from a document justifying a white supremacist terror attack. Yes, there are problems caused by those who abuse Islam, Judaism, Buddhism, even Christianity. And yes as a global community, increasingly interconnected, we must challenge negative interpretations and clear abuses of religion.

But when our leaders leverage extremist and far-right ideologies to prop themselves up politically, is it any wonder that the weak, the insecure, the foolish, the disenfranchised may take their words and cause harm?

If a 15-year-old school girl can be groomed on-line and in person, such that she abandons her life in relative safety in the UK and moves to a war zone believing that that is somehow ‘better,’ as she has bought into a corrupt and ugly interpretation of Islam. And we are spending resources to counter this form of extremism.

Why are we not spending similar resources to counter the ideologies that misguide, fuel hate and mislead disenfranchised white men to become conduits of hate that blame, target, and attack black people, Jewish people, Muslim people, anyone and everyone who is a convenient scapegoat for whatever issue they are struggling with?

Our politics need to change. Our priorities need to be realigned. Our conversations need to become better. A better balance must be struck between freedom of speech and inciting hatred for the sake of causing harm to another.

Yes, ugly, unpleasant, strange, silly, even stupid interpretations of any faith should always be challenged, as, after all, faith is meant to uplift society. But it is perfectly possible to disagree with another person’s point of view without insulting their right to hold those views.

There is a verse of the Qur’an which sums up where we are today: “Verily, Allah will not change the condition of a people as long as they do not change their state themselves” [al-Ra’d 13:11].

Meaning that if we want all of our lives to become better, we must improve who we are as people, raise our standards for dialogue and conversation, learn to disagree without reducing ourselves to hate and harm, and better reflect the positive values of the human condition.