Around 25,000 gathered at North Hagley Park this morning, a few meters away from Al Noor Mosque where a terrorist killed 50 Muslim worshippers two weeks ago, to attend a memorial service to honor the victims, The Guardian reported Friday, March 29.

Addressing the crowd in the park near the Al Noor mosque, where more than 42 people were killed earlier this month, Prime Minister Jacinda Ardern said New Zealand had “a responsibility to be the place we wish to be”.

“The world has been stuck in a vicious cycle of extremism breeding extremism and it must end,” she said.

“We cannot confront these issues alone, none of us can … The answer lies in our humanity. But for now, we will remember the tears of our nation and the new resolve we have formed.”

“We each hold the power – in our words, in our actions, in our daily acts of kindness – let that be the legacy of the 15th of March,” Ardern said.

The PM praised globally for her compassionate and strong leadership after the March 15 massacre, received a standing ovation as she took to the stage wearing a Maori cloak.

She said to applause that New Zealanders had: “a responsibility to be the place that we wish to be. A place that is diverse, that is welcoming, that is kind and compassionate. Those values represent the very best of us. But even the ugliest of viruses can exist in places they are not welcome. Racism exists, but it is not welcome here.”

The service, known as Ko Tātou, Tātou We Are One, was broadcast live to many other events taking place around the country.

It was attended by dozens of government representatives from around the world attended the memorial, including the Australian Prime Minister Scott Morrison. 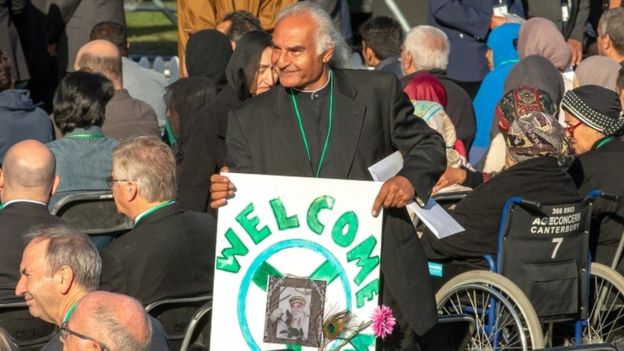 Family members of victims of the Christchurch shootings attended the event

President of the Muslim Council of Canterbury, Shaggaf Khan, said he was humbled by the outpouring grief that followed March 15 massacre.

“From this hate, how much love has been shared? Out of this darkness, how much light has been spread?” he asked the crowd.

“That you did not leave us alone in our sadness. New Zealand responded in a way that none of us will ever forget – that let the world know who we really are.” 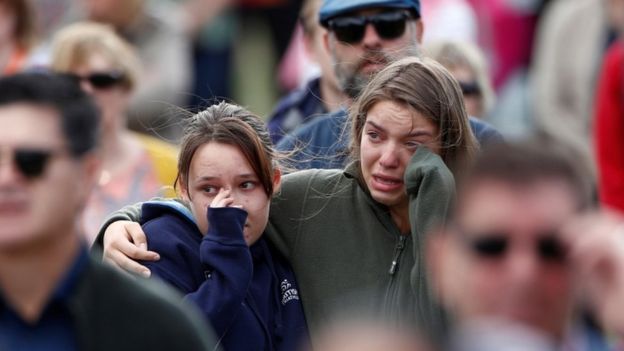 People cried as they sang the New Zealand national anthem

Islam, who converted to Islam in 1977, told those “shining souls whose lives were snatched away in that moment of madness may peace be upon them”.

“Peace in this world may take a bit longer,” he said.

“We learn about things through their opposites and it’s opposites like this – the evilness of that act and what drove it – we find its opposite – which is the love and kindness and unity which has sprung up right here in New Zealand.” 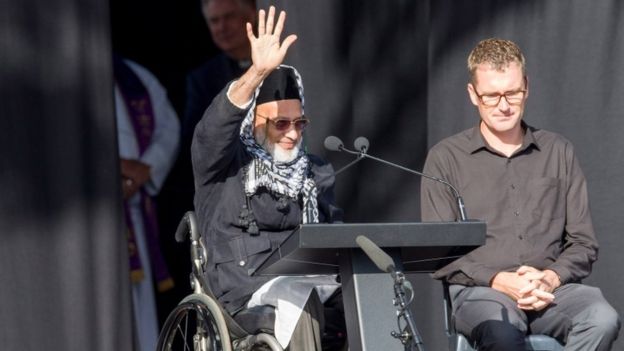 Farid Ahmed, one of the survivors of the Christchurch shootings, garnered huge round of applause for his speech

All 50 names of the victims who died in the attacks were read out at the event by members of the city’s Muslim community.

The victims included men, women and children from across the world. The youngest victim was just three years old.

There are still 22 people recovering in hospital, including a critically injured four-year-old girl.

Farid Ahmed, who survived the Al Noor mosque attack but whose wife Husna Ahmed died, said when he is asked why he has forgiven the attacker, he says Allah loves those who “control their anger and pardon their fellow human”.