QUEENSLAND – Living thousands of miles away from her home country Iraq, Wurood Albayati could not ignore the occasion of the new Hijri year without a proper celebration.

Therefore, she adapted to the traditions of her new community in Queensland, inviting her neighbors to a delicious dinner.

“I cook food and deliver it to neighbors and say, hey, we as Muslims have a special occasion on this day and here’s some food for you,” she told ABC News on Sunday, October 8.

“I also write a note of what people like Che Guevara or Mahatma Gandhi say about Iman Hussein so they know what he is about.”

Albayati and her family moved to Australia four years ago after her husband got a scholarship to complete his PhD in Queensland.

This year she made biriyani, a chicken and rice dish packed with dried fruit, nuts and spices.

Living next to Albayati over the past three years, her neighbor Anna Ling looks forward to the time each year when she gets a knock on the door to see her friend with a delicious meal in hand.

“I’ve known them for three years now,” she said.

“Every year they bring food to other people. She brought a properly cooked meal and a note.

“Wurood is a really nice person and [going door to door] is a really positive thing to do.” For Albayati, the occasion gives her a chance to connect to the Australian society, instead of locking herself inside and remember Bagdad.

“I just go out and be friendly because [Islam] is about loving people and living in peace and harmony,” she said.

The mother of three said she has adapted Muharram traditions to suit her new surroundings in an effort to combat negative stereotypes.

“There is good media and bad media but most people here have a corrupted idea about Muslims,” Albayati said.

“It’s our responsibility to make it clear that it’s just like any other religion, we have good guys and bad guys.

“I always tell my kids, you represent Muslims so let people know who you are by your actions.” 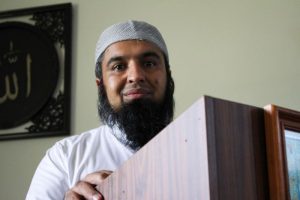 There are many important days during the first month of the Islamic calendar and traditions are different for Shiite and Sunni Muslims.

Ashura is marked on the 10th day of Muharram.

While fasting and reflection is a key tradition for Sunni Muslims, Albayati and her family used the day to mourn.

“Shi’a and Sunni Muslims agree the death of Imam Hussein was a tragedy,” she said.

“But the response to tragedy is different. We use his death to express our grief each year at every injustice in the world.

“In the Muslim culture celebration of the New Year is different to the Western culture who have a big celebration with music and dance,” he said.

“The Shiite brothers and sisters mourn this month. Sunni Muslims want to commemorate Muharram by trying to follow his footsteps instead of mourning, but I try to look at the uniting factors rather the dividing factors.

“We think about why we are here and pray for the betterment of all of the society.”