More than five months after the terrorist attacks on Christchurch mosques, Australia’s Richmond Muslim player Bachar Houli and New Zealand star Sonny Bill Williams paid an emotional visit on Friday to the families of the victims, sharing prayers and stories.

“I had tears, but they were actually joyful tears,” Houli told the Sunday Age, as he reflected on attending a funeral service in which 27 of those who had died were laid to rest.

“No one wants to see their family members pass away and leave this world but I come from a faith that we believe that we belong to God, and to God, we shall return.

“The greatest thing that these families had in their mind is that there is no better way to leave this world than in a state of worship.

“These young men and women were in a state of worship at the mosque at the most blessed time of the week being a Friday.

“They were in the state of prayer … there is no better way to pass away, to be quite honest.”

Finishing Richmond’s game on round one, Houli flew to New Zealand to meet with the families who had been affected by the Christchurch massacre. 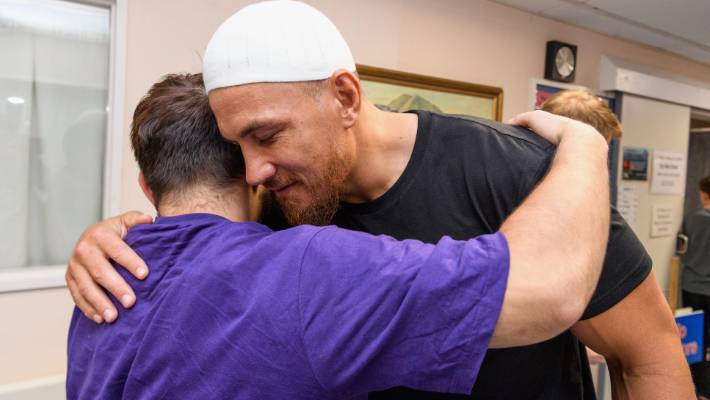 Sonny Bill Williams with one of the survivors

Houli was invited to New Zealand by rugby union star Williams and the two visited and spent time with mothers, fathers, sons, and daughters who had lost beloved family members, friends and community members, as well as victims who had survived the horrific ordeal.

After the service, Houli and Williams went out for ice cream with some survivors and family members who had lost loved ones.

The Australian football star said his team encouraged him to travel to Christchurch, despite his hamstring injury.

“I raised it to both [AFL chief executive] Gillon [McLachlan] and the club,” Houli said.

“They were extremely supportive, they said, ‘We are willing to do whatever you want and whatever it takes to support you because this is important’.”

Houli is not the first player to support Christchurch victims.

Apart from Williams who was among first supporters, four Manly Sea Eagles players paid an emotional visit on March 28 to one of the mosques which were the scene of a terrorist shooting in Christchurch.