“New Zealand we love you, you are us.”

Showered with love and support from their fellow New Zealanders, the Muslim community in Auckland city thanked people for their support after the terrorist attack in Christchurch, New Zealand Herald reported.

“New Zealand we love you, you are us,” this was the message from Auckland Muslims, using the same words spoken by Prime Minister Jacinda Ardern on Friday when she addressed the families of people killed in the mosque attacks: “You are us.”

“We feel a lot better with the support we’ve had throughout New Zealand,” Sonny Tazeem Ali, speaking for the board of trustees of the Māngere Muslim school Al-Madinah, said.

“We feel all New Zealand is standing behind us supporting us. Our children feel supported. You just don’t know how much it means to us.”

Al-Madinah, a decile-2 school of 550 boys, and its neighbor the Auckland Airport Mosque invited other Auckland schools, politicians and community leaders to remember the 50 Muslims who were killed in Christchurch last Friday while praying in two of the city’s mosques.

During the event, Ali expressed to the board of trustees of the Māngere Muslim school Al-Madinah that 350 guests on the school’s basketball courts and the wide New Zealand social support made a big difference for the families of the Muslim victims. 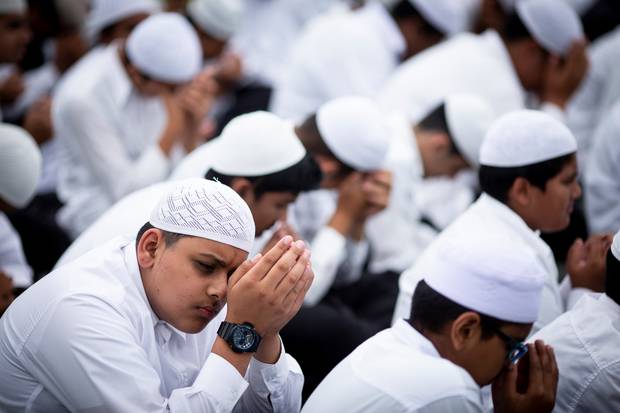 Students prayed during the memorial ceremony for those who died in the Christchurch mosque shootings. Photo / Dean Purcell

Like everyone in New Zealand’s small Muslim community, the school had close connections to some of the massacred worshippers. Some of the school members traveled from Auckland to Christchurch to participate in the funerals of their friends.

One of them is Sarfaraz Sher Ali, a Fiji Indian imam who teaches religious studies at the school. He caught a quick 6 am flight to Christchurch on Saturday, March 16 to support the injured and bereaved Muslim families.

Sher personally knew Hafiz Musa Patel, a Fijian imam who had only just arrived in Christchurch on a visit when he was gunned down in the mosque.

“He served the Fijian community for 30 years in Fiji. He was going to lead that Friday prayer. I met some of the injured victims in hospital and was impressed by their great strength,” Sher said.

He addressed the audience by reminding them that “Prophet Muhammed (PBUH) was asked what were the most important virtues, he replied, ‘Patience and tolerance.’”

“This incident has made us as a nation respected and admired all over the globe. We’ll always stand united as one,” She expressed.

In a show of this national uniformity, Al-Madinah students, resplendent in white Muslim uniforms, performed a rousing haka and sang the national anthem in te reo Māori and English.

One of the guests of the school’s event was Auckland Mayor, Phil Goff, who said: “I hoped the terrorist isn’t given the opportunity to use the courtroom as a platform for his poisonous ideology”.

“Let him sit in prison totally anonymous and denied the fame and notoriety that he sought by perpetrating this act,” he hoped.

Over the past week, New Zealanders have showered Muslims with messages of support and love.

The Prime Minister of New Zealand, Jacinda Ardern, announced on March 20 that the Pacific nation will observe a two-minute silence in memory of the Christchurch Muslim martyrs and the Adan call to Islamic prayer will be broadcast nationally on Friday, March 22 in solidarity with the Muslim New Zealanders.

A ‘human chain of love’ is also planned on Friday, March 22 around mosques in New Zealand to support the Pacific nation’s Muslim community.