GENEVA – The UN on Monday called for an investigation and prosecution of Burma’s top military officials for genocide, crimes against humanity, and war crimes against Rohingya Muslims.

“The crimes in Rakhine State, and the manner in which they were perpetrated are similar in nature, gravity and scope to those that have allowed genocidal intent to be established in other contexts,” said the UN Independent International Fact-Finding Mission on Myanmar [Burma], Reuters reported.

In the final 20-page report, it said: “There is sufficient information to warrant the investigation and prosecution of senior officials in the Tatmadaw (army) chain of command so that a competent court can determine their liability for genocide in relation to the situation in Rakhine state.”

The UN report added that human rights violations and abuses committed in Kachin, Rakhine, and Shan States need to be probed at the International Criminal Court.

It named the Burma army’s commander-in-chief, Senior General Min Aung Hlaing, and five other generals who should face justice.

They included Brigadier-General Aung Aung, commander of the 33rd Light Infantry Division, which oversaw operations in the coastal village of Inn Din where 10 Rohingya captive boys and men were killed. 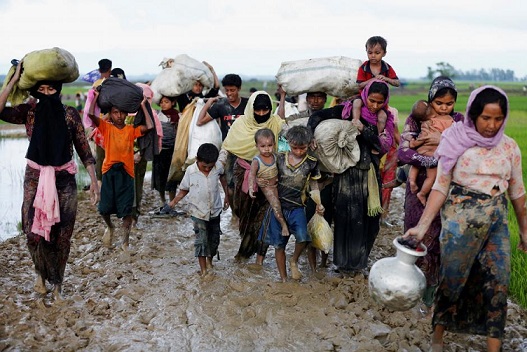 The report added that crimes against humanity committed on Rohingya Muslims include murder, rape, sexual slavery and other forms of sexual violence.

According to the report, State Counsellor, Daw Aung San Suu Kyi, did not prevent the crimes against Rohingya Muslims.

“The State Counsellor, Daw Aung San Suu Kyi, has not used her de facto position as Head of Government, nor her moral authority, to stem or prevent the unfolding events in Rakhine State,” the report said.

“The Government and the Tatmadaw have fostered a climate in which hate speech thrives, human rights violations are legitimized, and incitement to discrimination and violence facilitated,” it added.

“The impetus for accountability must come from the international community,” the report said.

In its recent report, Forced Migration of Rohingya: The Untold Experience, the OIDA increased the estimated number of murdered Rohingya to 23,962 (±881) from an earlier Doctors Without Borders figure of 9,400.

According to Amnesty International, more than 750,000 Rohingya refugees, mostly children and women, have fled Myanmar and crossed into Bangladesh after Myanmar forces launched a crackdown on the minority Muslim community.