COX’S BAZAR – After being dragged from her home, discarded on a pile of dead bodies, raped, and then set on fire, Mumtaz finally escaped to neighboring Bangladesh.

“They killed and killed and piled the bodies up high. It was like cut bamboo,” says Mumtaz, a Rohingya woman from the village of Tula Toli in western Myanmar [Burma], CNN reported.

“In the pile there was someone’s neck, someone’s head, someone’s leg. I was able to come out, I don’t know how.”

Escaping the mass grave did not end her horrors as Mumtaz was dragged to a village house and raped by soldiers. The wooden house was then locked and set on fire. She only escaped with the help of her young daughter.

“I called to my mum. And my mum said, ‘who are you?,'” her seven-year-old daughter Razia, who was in the hut, says.

“My mother’s head was split. She was thrown aside. They struck me and threw me aside.”

“I said ‘your finger is on fire.’ Then my mum and I got out and left.”

The pair squeezed through a damaged part of a fence and hid in a vegetable patch, before other villagers found them and helped them get to Bangladesh, where a staggering 615,000 Rohingya refugees have fled since August 25, according to aid agencies.

The most recent bout of mass killings began in August 2017 when the Burmese military intensified what it calls “clearance operations” targeting “terrorists.”

The UN calls what’s happening in Rakhine a “textbook example of ethnic cleansing” and the killings that took place in Mumtaz’s village on August 30 have been described as one of the worst atrocities of the past two and a half months.

Mumtaz’s terrible testimony is part of a video by Shafiur Rahman, a Bangladeshi-British documentary maker, who has been working to document the horrors that occurred in late August of this year at Tula Toli village in Rakhine.

The dramatic footage shows dozens of men and women clambering across barbed wire fences into no man’s land, some of them covered in blood and carrying dead or injured relatives. Their distress is palpable. 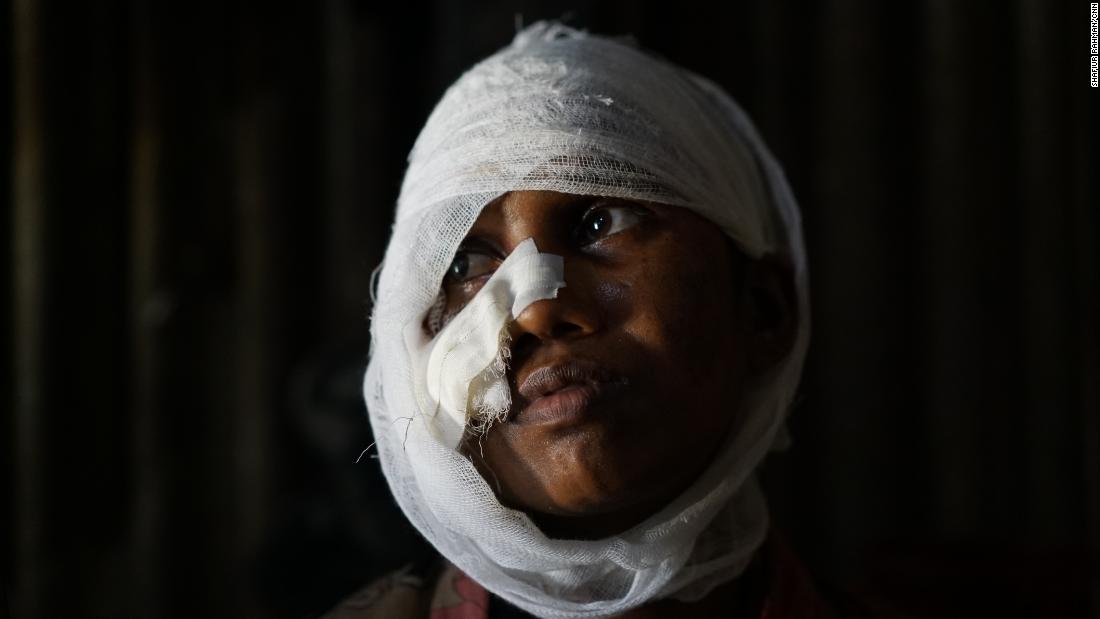 Mumtaz, photographed here on September 27, 2017, fled from Burma with her daughter.

“It quickly became clear to me that those telling me the most horrific accounts of their last few days were those coming from Tula Toli,” Rahman tells CNN. “And what also struck me was the consistency in their stories.”

Survivors, only numbering around 30, said that the authorities confirmed that they would not be harmed if they stayed at home.

Mohammed Nasir said he was told: “They might torch the houses, but they won’t kill anyone.”

Residents describe helicopters landing near the village at 8 a.m. on the morning of August 30. The soldiers were joined by around 50 Rakhine Buddhists and other non-Rohingya minorities from outside the village, survivors said.

“They asked us to gather on the beach,” Nasir says, describing the sandy bank of the meandering river that runs through Tula Toli. He saw the killings unfold from a hill.

“When they saw people gathering, they went straight for them. They were shooting continuously, at the same time the houses were burning,” Nasir added.

Another resident, Rehana Begum, said she was also told to leave her home and stay near the river.

“They kept us there by saying that they would do us no harm,” Begum says. “At 8 a.m., a helicopter landed and the village was besieged. Whoever was able to flee, they fled.”

“(The military) surrounded us suddenly and we could not escape because of the river. The tide was high. There were no boats. Since my brothers could carry my children, I was able to swim and flee,” she says.

“Many were shot, scores got hit and they fell on their face,” Rehana said. “Those lying on the ground were picked up, chopped and later they were thrown into the river.”

Mumtaz, who spent 15 days bed-bound in a clinic, unable to speak or even sip a glass of water, is now healing, but faces a desperate future.

Her little girl, Razia, is also recovering, but suffers the mental trauma of the memories.

“My brother and the others were burnt,” Razia says. “They were killed by being smashed. They shot dead my dad.”

“She saw. The little girl saw everything,” Mumtaz says. “She tried to pick up her brother as he was burning. She couldn’t.”