YANGON — Myanmar’s Rohingya Muslims who fled to Thailand are facing prosecution after a new law on undocumented workers was introduced at the Thai parliament this week, Frontier Myanmar reported on June 27.

Rohingya are citizens of Myanmar denied by the government to have the documentation required for legalizing their status. The new law reads that by June 30, all migrant workers in Thailand must have their nationality verified to legally work in the country.

The Thai government says that its new decree is designed to fight human trafficking in the Southeast Asian country which is known for forced labor and sexual slavery.

Rohingya who are unable to complete the documentation process will be considered illegal migrants and, if caught, will face fines of up to US$1,500 as well as deportation and a two-year ban on applying for a Thai work permit.

The survey recounted systematic discrimination by Myanmese officials involved in the registration process, according the report which was published at the Foreign Correspondents’ Club of Thailand.

Thailand requires those without an ID or household registration documents to obtain a Certificate of Identity from the Myanmese discriminatory authorities, which can be used to apply for a Thai work permit. 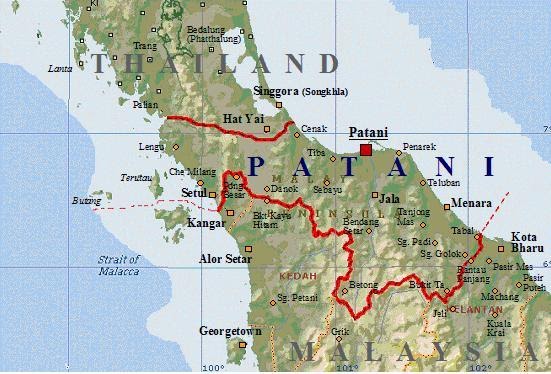 A topographic map of the Muslim country of Patani which lies between Malaysia and Thailand.

BHRN’s report found that the Myanmese authorities ask Rohingya to submit more documents than other citizens, including a valid ID card, household registration list, and letters from police and authorities in their place of origin.

The Myanmese immigration authorities refuse to register the Rohingya ethnicity. Instead, they often require them to add another designation, usually one of a Muslim-majority country, such as Bengali or Pakistani.

Yet despite intensified threats of prosecution in Thailand, almost all of those surveyed by BHRN reportedly said they would rather stay than return to Myanmar.

It’s worth mentioning that Thailand occupies the Muslim country of Patani since the 1909 Anglo-Siamese Treaty. According to the Armed Conflict Location & Event Data Project (ACLED), the Thai army massacred more than 6,500 Muslim Malays in Patani to date.