KUALA LUMPUR – Angry protesters took to the streets in Asian cities from Jakarta to Dhaka on Friday, November 25, to denounce Burma’s indiscriminate killing and rape in a military crackdown on the country’s Rohingya Muslim minority.

“Malaysia also calls on the government of Myanmar to take all the necessary actions to address the alleged ethnic cleansing in the northern Rakhine State,” Malaysian foreign ministry said in a statement by Reuters.

“The ministry will summon the ambassador of Myanmar to convey the government of Malaysia’s concern over this issue,” it added, without giving a timeframe.

Hundreds of Rohingya Muslims marched in the Malaysian capital of Kuala Lumpur, condemning the bloody crackdown on the persecuted minority and criticizing Nobel Peace Prize winner Suu Kyi for her inaction on the matter.

Protesters demanded humanitarian aid for Rakhine, and urged that the military seize all attackers.

The situation poses a serious challenge to leader Aung San Suu Kyi, who swept to power last year on promises of national reconciliation.

“The Myanmar government says the claims are all fabricated but they are not fabricated,” Rohingya community leader Muhammed Noor told reporters, referring to reports of incidents of killing, rapes of wives and daughters and home burnings.

“This movement has to continue, to pressure the government to stop the killing.”

Protests were also held simultaneously in Bangkok, the capital of neighboring Thailand, and in the Indonesian capital of Jakarta.

Protesters in Jakarta called for the Nobel panel to cancel its award to Suu Kyi.

Although Rohingyas have lived in Burma’s Rakhine state for many centuries, the Buddhist-dominated society identifies them as ‘illegal immigrants’ from Bangladesh. Following demand from the Buddhists, in 1982, Burma’s then military government stripped the Rohingyas of their citizenship.

After the Rohingya turned stateless, persecution of the community began soaring in Burma. In recent years, especially since 2012, Rohingyas have been facing an increased level of pressure in many terms.

In the past five or six years, at least 2,000 Rohingyas, including many little children, have died in the sea or on the land in Thailand and Malaysia while they were fleeing Burma, rights groups estimate.

With Bangladesh being quite strict and regularly pushing back the Rohingya refugees to Burma, for the fleeing Rohingyas Malaysia is the only option left for migration. 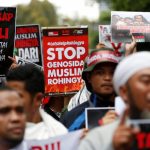 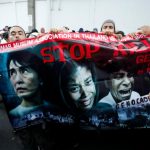 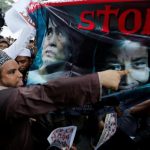 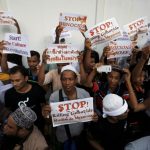 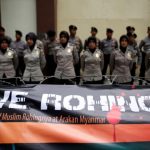 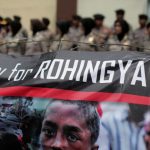