PUTRAJAYA – A Malaysian Muslim security guard at Putra Mosque in Putrajaya, the administrative capital of Malaysia, has taught himself basic sentences and key phrases in seven languages in order to communicate easily with the picturesque mosque’s tourists, Says.com reported on March 13.

“I practiced the words or phrases I didn’t understand over and over again and soon enough, I could speak the language well,” said Mohamad Khairul Azhar Mohd Razali.

Raised in Kelantan, the man could only speak in the Kelantanese dialect of his native Malay language when he first came to work in the capital city Kuala Lumpur.

After realizing that communicating with others was extremely difficult, Khairul made up his mind to learn Bahasa Malaysia in May 2017. Within three months, he had mastered the language and was speaking it fluently. 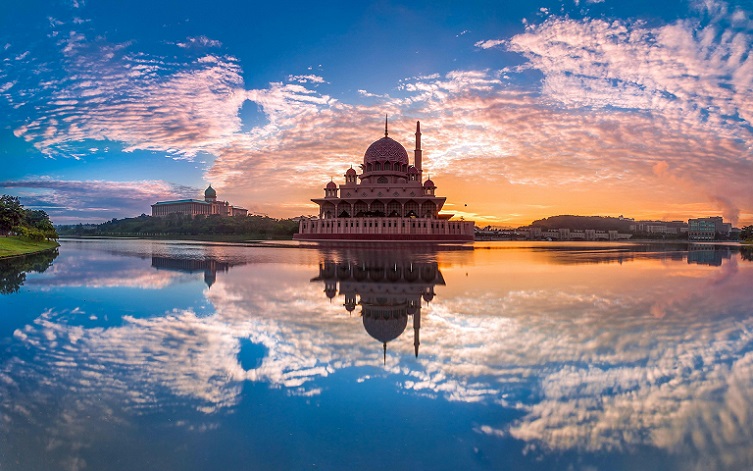 “I was first motivated to learn new languages as the nature of my work required communicating with foreign tourists who visit the landmark Putra Mosque which attracts visitors from all over the world,” the youthful security guard said.

To achieve this goal, Khairul started to ask the mosque’s foreign visitors to teach him basic phrases in their mother tongues, which he would then practice until he became fluent in it.

“Even if you get words wrong, people will help you to properly translate,” he explained, adding that he jotted down everything he learned in a notebook.”

Now that he loves learning languages and meeting people from different backgrounds, Khairul doesn’t mind the difficulties that come with his job.

“Even the exhaustion from 12-hour shifts don’t stop me from wanting to improve myself. I’m very thankful to the tourists,” Khairul said happily.

Interestingly, Putra Mosque is the principal mosque of Putrajaya city. Its construction began in 1997 and was completed two years later to accommodate as much as 15,000 worshippers.

It’s located next to the Perdana Putra, which houses the Malaysian Prime Minister’s office and man-made Putrajaya Lake.

In front of the mosque is a large square with flagpoles flying Malaysian states’ flags.

The pink-domed Putra Mosque is constructed with rose-tinted granite and consists of three main functional areas – the prayer hall, the Sahn, or courtyard, and various learning facilities and function rooms.