MUMBAI – A 75-year-old Indian Muslim has become the oldest among her community to memorize the Holy Qur’an after seven years of studying it, while another six-year-old girl from Bengaluru has made the similar achievement.

“Solutions to all the problems lie in there,” 75-year-old Radiya Vaziri, told The Hindu.

“Memorizing the Qur’an has had a positive impact on my health, and stress has reduced automatically,” she added.

The Dubai resident is the oldest Dawoodi Bohras to achieve the feat of memorizing the Qur’an’s 30 chapters.

The youngest is Ruqaiyah Khandwala, a six-year-old girl from Bengaluru.

Too young to understand the intricacies of the Arabic text, she nevertheless claims to have learned two lessons: “Allah doesn’t like people who tell lies, and if you hit someone, you will be punished.” 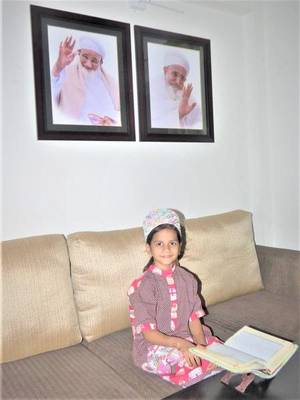 Her mother Khadijah, who memorized the Qur’an herself, describes challenges to commit the young girl to memorization.

“One needs dedication, but we’re so happy she achieved this. When she read the texts during her oral tests, everyone was in awe,” she said.

Ruqaiyah’s father Mufaddal Khandwala, a Bengaluru-based IT consultant, said initially she would recite a couple of lines.

“It gradually increased to three to four lines a day, then half-a-page, and soon, up to two pages.”

As time progressed, she would spend close to eight hours a day memorizing new verses and revising ones learned earlier.

“Her mother knew the techniques, so she was the best teacher,” said Khandwala.

Last week, the community’s spiritual leader, Syedna Mufaddal Saifuddin, celebrated the oldest and youngest Hafiz at the Aljamea-tus-Saifiyah, an educational institute run by the Bohra community in Surat.