DELHI – A former Indian Muslim street beggar and rickshaw driver has opened an orphanage and two schools with a vision to never deprive children of the right to education.

“I am Gazi Jalaluddin, a taxi driver. I am a self-made man. As a child, I begged on the streets and rode a pushcart too. When I grew up I learned to drive a taxi I had a single wish – to go to school and study [however] it couldn’t be fulfilled,” Gazi said, Ilmfeed reported.

“But I thought that nobody else should have a life like mine.”

As a young student, Gazi achieved the first position in his class. Struggling to make ends meet, his father was not able to enable his son to pursue an education. 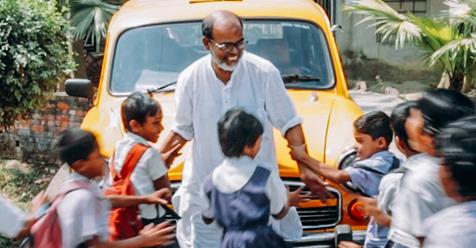 When Gazi’s father fell seriously ill, the talented youngster became a victim of dire circumstances and became a street beggar.

“When I quit school, the one thing I realized was that there were many children like me who resort to begging when their families cannot afford their schooling. This is what drove me to do something,” he said.

At the age 12, he took up employment as a Kolkata rickshaw driver, using some of his earnings from pulling his rickshaw to learn to drive and eventually became a taxi driver.

The teenager soon started the ‘Sundarban Driving Samiti’ to assist unemployed and underpaid youth by providing training and employment.

“I saved right from the day I started earning and planned to use that money to open a school in the Sunderbans. I also taught 400 people to drive with a single condition – all of them would help me start the school,”

“Today I have opened not one, but two schools.”

Today, Gazi is now in his mid-60’s and runs an orphanage and two schools. All his projects are self-funded and there are almost 500 children who are taught and mentored by 26 teachers.

“Other than supporting my family and educating my sons I have educated kids in the Sunderbans too so that no other child is forced to beg again. I have another dream – to start a college and I am sure my son will make that happen. I Jalaluddin Gazi, want to eliminate illiteracy from India.”