BEIJING – The Chinese government has stepped up its crackdown on the Muslim community in the Uighur Autonomous Region of Xinjiang during the Muslim holy month of Ramadan, detaining them in reeducation camps and banning fasting.

“They are continuing to put people in those concentration camps while very few people can come out,” Dolkun Isa, the head of World Uighur Congress, told VOA.

“No one knows under what terms they are detaining people. No one feels safe.”

Isa accused the Chinese government of jailing more Uighur Muslims since the start of Ramadan on May 16.

He added that the government has prohibited since last year most religious practices of Muslims, including preventing government employees from fasting and visiting mosques during Ramadan, while at the same time organizing alcohol and pork consumption competitions.

“If someone at work tries to secretly fast, they will give him food and water during lunch,” he added.

Kashgar, a district located near the border with Kyrgyzstan, Tajikistan, Afghanistan, and Pakistan, is one of the most affected areas with the Chinese authorities’ detentions.

“Tradesmen from Kyrgyzstan and other countries tell us they can’t find young men in Kashgar markets anymore. All that is left are old men, women, and children,” Isa, the exiled Uighur leader, said.

“Id Kah Mosque, which used to be a symbol of Kasghar and hosted hundreds of people, is now completely empty,” he added. 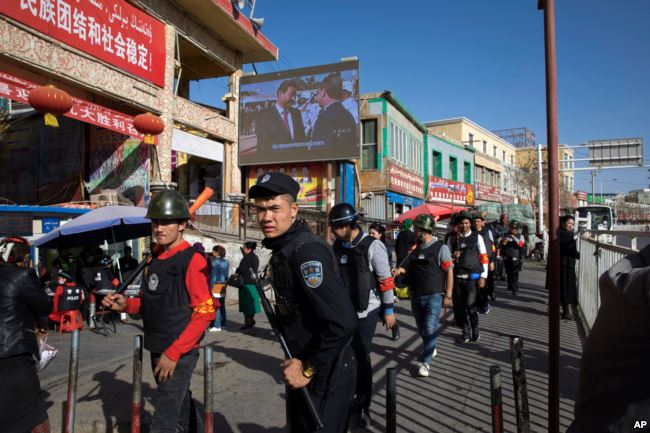 “That was a concept you thought was gone decades ago, and [it’s] being experienced in a growing amount,” Brownback said.

Chinese authorities impose restrictions on Uighur Muslims in the northwestern region of Xinjiang, especially during Ramadan.

Rights groups accuse Chinese authorities of a heavy-handed rule in Xinjiang, including violent police raids on Uighur households, restrictions on Islamic practices, and curbs on the culture and language of the Uighur people.