ALGIERS – With `Eid Al-Adha, or feast of sacrifice, fast approaching, Algerian sheep traders are going online to offer their livestock and spare the risks of traveling to big cities, BBC reported.

Using Facebook and Ouedkniss.com, an Algerian classified ad site, traders post pictures of their livestock from the comfort of their homes.

One farmer told Echourouk newspaper that he used the internet to sell 23 sheep for a total of 500,000 dinars ($4,215; £3,260). Another offered the free delivery of `Eid kebabs to major Algerian cities.

These farmers hope the e-commerce can spare them the risks that come with traveling to big cities to sell their sacrificial animals, recalling previous cases of traders being beaten and stolen. 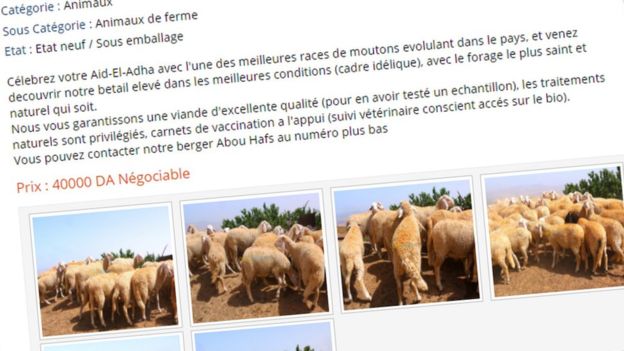 An ad posted on Ouedkniss on 7 August showed pictures of rams of “a global renown” which were for sale at “an excellent price”.

Preparing for `Eid Al-Adha, six million animals are destined for slaughter this year in Algeria, compared with four million in previous years.

The National Federation of Farmers has stressed that sacrifices are both readily available and affordable for Algerians.

A financially-able Muslim sacrifices a single sheep or goat or shares with six others in sacrificing a camel or cow as an act of worship during the four-day `Eid Al-Adha celebrations.

The Udhiyah meat is divided into three equal parts, one each for one’s own family, friends and the poor.

It is permissible that someone in another country could perform the sacrifice on one’s behalf.