Muslims believe that at the end of our life, we will stand alone before Allah Almighty on Judgment Day and give an account of all the things we have done, good or bad.

On that day, we will all feel so ashamed that we will weep in the presence of Allah Almighty, asking forgiveness for all the wrong we did and for all the good we failed to do. There will be no one to plead for us, no one to make excuses for us. It will be as plain as that.

As a man, I feel Islam to be a very manly religion. (That doesn’t mean in any way that Islam isn’t “designed” for women). Standing at prayer alongside others in the mosque helps me to be Muslim. With the brothers on either side of me and in front of me and behind me, I know that we are all praying for similar things.

To Become a Good Man

Over a lifetime of teaching, I have been spoken to by many parents about what they want for their children. They want a good education that will open up a world of opportunity. They want open-minded children who will be able to think for themselves. Time and again, though, parents have said to me when talking about their sons that all they want is that Ahmed or Muhammad or Ali grows up to become a good man. I can think of no greater wish for one’s son.

Strength of Body and Mind

A good Muslim man needs to know that, at the end of each day, he must give an account to Almighty Allah of how he has used his talents and gifts during the day. He has been given strength and intelligence and should have used them well.

As a Muslim man, he should have worked hard to provide for others and for the whole Muslim community. He should have spoken out or acted in defense of those who could not defend themselves. He should have been strong in defense of Islam itself, quietly letting others know, without shouting or making a fuss, that Islam is not to be played with.

Being a man doesn’t mean having to use fists to make a point, but it does mean being strong. Islam is strong and it doesn’t need anyone’s approval. As a Muslim man, there are times when it might be necessary to stand up and let others know that they cannot allow harm to come to your wife or family. That is one kind of strength we need to show. Another strength, though, which is much more difficult, is to know when to keep silent on their behalf as well.

Being a man means looking after your body and being in tune with your body. If you don’t look after all the parts in your car, it will break down on you. The body is just the same. Physical exercise, then, and the right food are very important if we are to function properly.

As Muslims, we know that fasting is sometimes necessary to tame our restless bodies so that they don’t have power over us. We control them, not the other way round. Keeping the right balance of work and recreation is a good way of keeping our bodies healthy.

Being proud of your appearance is important. It shows that you appreciate what Allah has created. Hard work, itself, makes us realize the strength we have been given and the duty we have to use it. 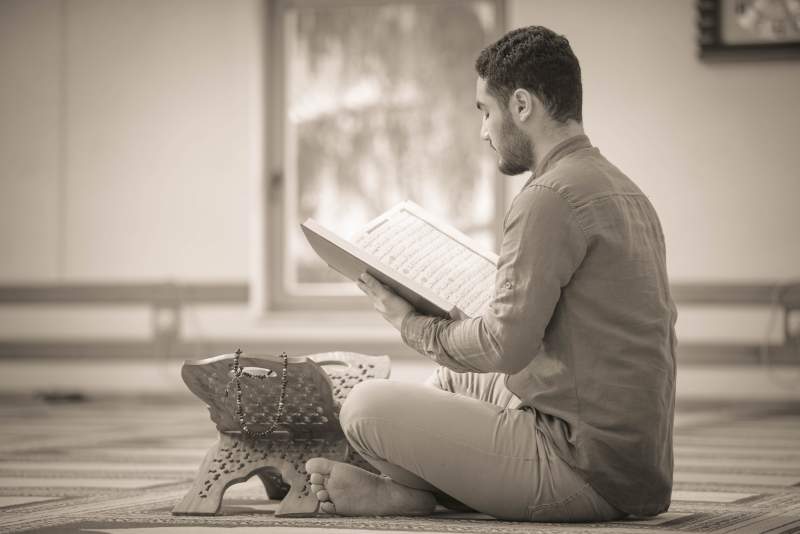 The Complete Way of Life

During a man’s life, he has to balance many things. He has to be a husband and a father, a brother and a son, a neighbor, a brother to his brothers and sisters in Islam, as well as a member of the wider community, giving a good example to them all of what it means to be Muslim.

The most wonderful thing in all of this is that Islam informs us about all of it. It informs a woman how to be a good woman. And it informs a man how to be a good Muslim man. It tells him how to treat his wife, how to bring up his children, how to work and deal with others. Islam, of course, is not only a religion but a complete way of life.

For a Muslim man, then, standing in rows at prayer is a very manly experience. In one row, we see all of the humanity. There is the young boy, still not fully understanding when to go up and to go down, but infinitely attentive to everything his father does. He knows that if he copies his father at prayer, he will learn to pray well.

There is the young man, standing tall and proud as he prays, showing that all of life is before him. There are men in the row who have just come in from work, water still on their hands and faces after they washed before coming into the prayer hall.

They know that when the prayer is over they will go back out to backbreaking hard work. There are other men with their sons standing next to them, knowing the great responsibility they have in giving a good example and bringing them up well. And there is the old man, stooped with age, who takes a lot of time in going down to prostrate himself on the ground, his forehead bruised with so many years of prayer, yet proud of his life and his achievements before Allah Almighty.

To be Muslim men is to recognize that we are nothing before Allah Almighty, that we have nothing without Him and that every good thing comes from Him. It also means, though, that if we submit to His will, our potential is limitless. He has made us in the best of molds. In sha’ Allah, we will live up to our potential and become the men He wants us to be.