The strangest things have been happening to you lately and you have no idea why.

Suddenly, you feel you live in a fishbowl where your every move is watched, where you are being studied from a far and from close by, where your taste in clothes, music, food, books, art, etc., is being analyzed, where your “Muslim-ness” is of concern to people, and where you, my friend, can choose to either sink or swim.

It was not always like this, but, regrettably, you are growing up at a time when the most commonly used terms to describe your religion and people who belong to your religion range from backward, anti-progress, and oppressive to extremists, fundamentalists, and violence-prone.

The idiom “sticks and stones may break my bones, but words will never hurt me” is false, because words do hurt and sometimes the sting of words remains long after the physical wounds, from an assault by sticks or stones, have healed.

With every major conflict in the world today being of direct or semi-direct concern to Muslims, life seemingly will get a lot worse before it gets better. Will you continue to identify yourself with Muslims? So what will it be? Will you sink or will you swim against the tide of negativity being directed at Islam and Muslims?

Be Proud, and If and When Needed, Say It Out Loud 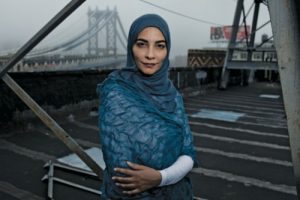 out or be identified as a Muslim. Well, that might be easier and more manageable for the young men who have not yet matured enough to have facial hair and can really blend with a baseball cap on backwards, baggy jeans drooping, and sports jerseys.

But is that really a solution? Is it even fair to our young sisters who wear hijab and are, therefore, recognized as Muslims from the moment an onlooker is able to discern the head covering? And perhaps it would be idealistic to say that all young women wear the hijab, and so, it is just as possible that those women who do not wear the hijab can and do blend in by, well, wearing whatever it is that the non-Muslims are wearing, imitating their hairstyles, and applying makeup like them. Let’s be clear that blending in to the point of being unable to be discerned as a Muslim is not an acceptable option for us.

So what happens when people know that you are a Muslim? Nothing needs to happen really, other than the fact that you have the internal pride in admitting to yourself and to everyone else around you that you are a Muslim; not just as a slogan, but because of your beliefs, your practice, your character, and, most of all, your inclination to be of service to Allah by serving others.

We are reminded in the Qur’an by Allah Almighty who distinguishes between believers, stating,

“And who is better in speech than one who invites to Allah and does righteousness and says, “Indeed, I am of the Muslims.” (Fussilat 41:33)

It is important that we study this verse, especially in the context of living in the West, among mostly people of faiths other than Islam. The main point here is the conversation, the dialogue that will take place more and more often between you and young people of other faiths or adults of other faiths. As we noted above, among young people and adults alike, there has been constant and consistent pressure to condemn the actions of those fringe Muslims who choose to commit acts of violence and terror in the name of Islam.

Regrettably, along with the way of condemning these acts that violate the teachings of Islam, some of us find it difficult to maintain an attachment to the religion. We opt instead to shy away from admitting to being a Muslim. This shyness comes in various forms. One might be fasting during Ramadan and be offered food by a non-Muslim. The best response, in the spirit of calling people to Allah, meaning, informing people about the teachings of Islam, would be to say, “No, thank you. I am fasting.”

Regrettably, more often than not, the response from young Muslims is “No, thanks.” Period. No further conversation, no dialogue, no indication that a spiritual experience is in progress via a day of fasting. Such a response yields no further potential for informing others about our faith and of the beautiful and life-transforming experience of fasting.

With more and more people becoming familiar with Islam and Islamic teachings, there is a chance, however, that the inquisitive person is likely to ask, “Are you fasting?” Or if the person knows that Muslims fast but is unsure that you are a Muslim, he or she might say, “Oh, I didn’t know you were Muslim.” Or if the person is unsure what it means to fast, he or she might ask, “What is fasting?” No matter what, the goal should be some level of interaction to increase the exposure and understanding of other people about Islam and Muslims.

With each day, a new event unfolds on the international stage, and by the will and plan of Allah, Muslims are almost always being implicated as the main actors, supporters, or sympathizers.

As young people, you will bear the brunt of the ambassadorial responsibilities of bridging the gap between Muslims and people of other faiths. We need you to be knowledgeable of Islam, to be strong in your faith, to be proud of your Islamic tradition, and to be articulate in your presentation of Islam. You do not have the choice, nor can the Muslim community afford, to shy away or worse yet feel as if you want to hide your Islamic identity.

The key here is not to lose heart, not to fear the blame of other people as they continue to associate violence and other false notions with Islam. Be confident in what you believe, who you are, and that you are on earth to serve Allah by serving the society in which you live. We make du`aa’ for every one of you in sha’ Allah to be among those described in the verse,

“And who is better in speech than one who invites to Allah and does righteousness and says, “Indeed, I am of the Muslims.” (Fussilat 41:33)